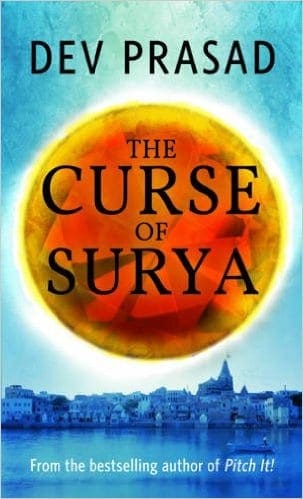 Summary: The story begins with the murder of a Tibetan reporter and takes us through a variety of characters, each having a hidden goal. The author weaves a delicate story of thieves, cops, grave diggers and the Syamataka mani, that elusive jewel etched in Indian mythology. Those readers who have read Dan Brown’s – The Da Vinci Code and many other novels such as “The Krishna Key” along similar plot lines might find this is a me too book. The novel is filled with cliches and plot loop holes that enthrall the reader, keeps you turning the pages, but could have been a whole lot better.

From the Book Cover: A race against time to find a jewel lost 5000 years ago. Sangeeta Rao, a beautiful, feisty anchor at Channel 7 TV in Singapore, rushes to Agra on a special assignment after an early-morning phone call. At the Taj Mahal, she meets Alan Davies, a charming Welshman. But a terrorist attack at Mathuras Krishna temple turns them into fugitives from justice and the duo must decipher a series of complex cryptographs and unearth the illustrious Indian jewel Shyamantaka that belonged to Surya, the Sun God, to prove their innocence. Before she realizes it, Sangeeta finds herself trapped in a world of betrayal, deceit and horror. Fast -paced and gripping, The Curse of Surya keeps you hooked and on the edge of your seat while you unravel one of the biggest mysteries in 5000 years.

Ever since Dan Brown’s The Da Vinci Code became a blockbuster best seller, many writers have delved into this genre of Mythology based suspense thrillers. While many have failed to replicate the success, a few writers have managed to create best sellers of their own, though not quite as spectacular as the original.

In his novel “The Curse of Surya”, Dev Prasad, author of previous bestsellers – “Krishna – A Journey through the Lands and Legends of Krishna” and “Pitch It!”, has managed to come up with an enthralling idea. The Syamantaka mani is part of an obscure legend associated with the Sun god in Indian Mythology. It possess the power to bestow great wealth and power to one who holds it, but also is cursed.

When an Indian god man is about to reveal the location of this great treasure, believed to have been lost for the past 5000 years, a series of events is set in to motion trapping the protagonist Sangeeta Rao in a difficult position. Sangeeta Rao is a Singapore based Indian origin journalist who is asked to cover an important event in Agra, but is drawn to the birth place of Krishna, where one of her Tibetan colleagues is discovered to have been murdered. She meets Davies who is not what he seems to be – a history professor. Add to the mix a conniving old man Alan and the persistent police officer Nisha and you have a powerful story that takes you along for a thrilling ride.

The story touches on the significant aspects of mythology surrounding this precious gem and moves from the heart of India in Mathura to the west coast to the land of Krishna – Dwarka. How the protagonist aided by Davies solves a cryptic puzzle and solves the mystery, makes you keep turning the pages.

The story line is quite good and kept me engrossed. The plot twist at the end is neat and should get points. The ending however looks rushed and could have been a little bit better.

What I liked about the book

Buy or Don’t buy?   A good book for a night time read when you’re having one of those insomnia sessions! Buy!