Latest on ManipalBlog
In this article hide
What is GBBC?
My Experiences during the GBBC
Day 1 (Morning)
Day 1 (Evening)
Day 2 (Morning)
Day 3 (Morning) 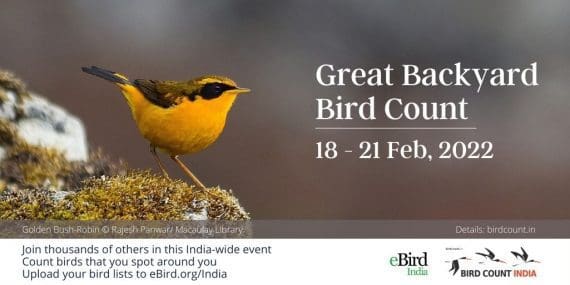 The Great Backyard Bird Count (GBBC) was initiated in the year 1998 by the Cornell Lab of Ornithology along with the National Audubon Society and has been continued every year in the month of February. The GBBC was the first Online Citizen-Science Project (also referred to as community science). The focus of the project was to collect data on wild birds and create a real-time snap-shot on bird populations.

My Experiences during the GBBC

GBBC says that the participants can look for birds for as less as 15 minutes and can look for birds during one or more days during the bird count which lasts for 4 days. This gave me the opportunity to go birding on February, 18, 19, and 29.

The 18th of February had finally arrived and by 6 am in the morning, I was already standing by my car’s door, thinking about which place to visit. Living in Bangalore, I am blessed with 198 different lakes which spread throughout the city. I was struggling to make a choice. There is this lake known as the Saul Kere which is no doubted the most blessed lake in terms of the variety and number of birds in my neighborhood. There are 199 different species of birds that have been spotted in this magical lake with a perimeter of around 2 km. There is also another lake known as the Kaikondrahalli lake which houses many migrant waterbirds during this season but none of these lakes seemed to attract me this morning.

The closest lake to my home is Kasavnahalli Lake, “KSV lake” in short. This lake is the birthplace of the bird watcher and photographer in me. Even though there are not as many birds found by this lake, I felt an unknown force pulling me towards it. I got into the car and started my journey to the lake which came to an end in about 3 minutes of driving. I told myself that if I had no luck in the next 45 minutes, I will leave for Saul Kere Lake. It was in the first 10 minutes when I was absolutely regretting my decision about coming here and that is when I saw a small bird sitting on a far away dried tree. I thought it would be another common bird, perhaps a flower-pecker (a small bird), and pointed my camera towards it. My hands started to shake, my legs started to shiver, my heart was was on a drum roll and I murmured ‘NO WAY’. I started to walk towards it taking careful steps, making the least noise and my eyes fixed on the subject, It felt like the cat in me had come alive. After every 7 steps I took, I stopped to click a picture to make sure I had something even if it decided to fly away. Eventually, I got close enough to get some sharp shots of the bird for which I have been craving to see, ever since I got into bird watching. The bird is known as the Verditer Flycatcher but “Blue Beauty” would be a more apt name. I was not able to comprehend this sighting and the fact that I too had photographed a bird that always belonged in my dreams. It was when the bird flew away, I realized that my legs and hands had cuts from thorns through which I had walked feeling no pain whatsoever. I was walking back to the walking track leaving thorny land behind when I observed I was dressed in all blue too. A blue shirt, blue shorts, blue socks, and blue shoes. This is a coincidence which I still do not believe is a coincidence. Imagine twining with a bird, how cool is that? I no more regretted my decision of coming here. I spent some more quality time here, recording the observations and photographing 56 different types of birds including my “Blue Beauty”.

After the very successful trip in the morning and a good rest in the afternoon, I was all set to head to the one and only Saul kere. The lake is a paradise for the bird watchers of Bangalore. This lake never ceases to impress me and this time was no different. There were records of a Taiga flycatcher which was recorded here in the past week and I really wanted to observe and Photograph it.

I talked to a few bird watchers who had recorded it and came down to a 15 meter stretch of track which was covered by a heavy canopy to look for it. I spent 140 minutes in those 15 meters straining my eyes to detect any movement. I never felt bored because there was enough action from other small birds such as warblers, sunbirds, and even flowerpeckers. I saw a different flying pattern towards the left and strained my eyes towards it. I could see nothing but huge eyes confirming it to be a Flycatcher. I had to look for other markings to Identify the bird itself and took a photograph and zoomed in to the details to find out that it was the Taiga itself and that it was a female. Now I had to get good photographs of the bird. I had to keep her in sight always. The presence of other similar-sized birds added to the hardship of tracking a small bird in the canopy. Finally, the bird came and perched on a less cluttered branch, where I saw the best opportunity to photograph her. Soon after it seemed as if she had disappeared into thin air. There was no sign of her at all. I decided to look for 30 more minutes and that’s when the Asian brown flycatcher showed up.

Another elusive bird with big beautiful eyes. I was overwhelmed with the sightings and photographs I had taken on this day. When I went back home I showed the images to my family members, who love nature as much as I do. I also shared the Images with a birding group (Bellandur Birders) of which I am a part. Bijoy, a senior Bird Watcher from the group mentioned “Not bad for a Tiger to see a Taiga” Referring to me as the tiger. The whole sequence of me photographing the three elusive flycatchers ran through my mind even in my sleep that night.

Some of my birding friends who live near White field had organized a bird walk at the Doddanakundi Lake, “DK lake” in short. I went to this lake on the 19th morning to be a part of this bird walk. There were almost 15 people who participated in the walk and most of them had come to see the White Wagtail which is the main attraction of this lake along with the Bluethroat (A small migrant bird). We spent around 120 minutes in the location where the White Wagtail is usually seen before most of them lost hopes and headed back. It took 30 minutes more, leaving me alone who still had hopes to see the bird. The sun was scorching hot and I had not carried my hat along, making it harder to wait for the bird. I wanted to head back too but the optimist in me stopped me from doing so. I was walking up the stretch trying to find the bird and it was 6th time I told myself “This is the last time I will look or I will head back” Even tho the last 5 laps of the stretches were not fruitful, I was blessed with the sight of the Pied Beauty during the 6th lap. I was more than overjoyed observing the bird and photographing it. The white wagtail is indeed a bird incarnation of the dog breed Dalmatian. Being an extreme Optimist is helpful, isn’t it?

While looking for the Wagtail itself, we countered other beautiful birds such as the Paddy field pipit, Barn Swallows, and many more. Talking about the Barn Swallows these birds hardly perch (sit). When I saw a few of them perched I had to photograph them. Not just me, 10-12 other photographers were also photographing the same bird. As a photographer, I imagine a frame in my mind before I shoot and for this frame, I had to enter the lake bed which was dried on the outer sides. I lay flat in a very uncomfortable position and photographed the frame I had visioned.

The spotted owlet was also spotted in the bark of a coconut tree and it seemed like he was a champion in the game of hiding and seek. I still remember, standing on my toes, crouching, ducking, sitting on my knees and what not to get a good look and a photograph of him. The walk came to an end with incredible documentation of 67 different species of birds. I did not go bird-watching again in the evening because this was a long morning by itself.

Going bird watching with my family is something I love. My father has developed a new passion for bird watching thanks to me and he joined me on the 20th morning to the Muthannalur lake. Which is neither gated nor maintained but is still one of the most beautiful lakes I have ever witnessed. I can proudly tell that both of us love exploring new places and when together we have no fear. We entered into a virgin woodland which is located on the East Side of the lake and began making tracks of our own. The place we discovered this time was absolutely gorgeous. It was a heavenly adobe for the birds and a treat to our eyes. We saw the rare Turtle doves, a pair of Hair crested drongo, and even the Red Avadavathet,  “Strawberry Finch.”

The name strawberry finch is used for the bird in the pet trade but is undoubtedly the most suitable name for the bird. The day ended with a count of 71 different species of birds and an ever-lasting memory with my father.

The initiative of GBBC has put a hook for bird watching into many individuals and is continuing to do so. Increasing the awareness for conservation of the world of birds.

About the Author: Aaditya G. Tili is a first-year student at Manipal Institute of Communication.

Bird-watching needs no introduction. Listed among the most pleasurable and well-liked hobbies this is a wonderful way to step outdoors to experience some of the earth’s greatest flying wonders. …

The deceptive veil of prejudice of cub petting being a means of so-called ‘Conservation’ is exactly that. A deception. …