Veteran Premier League referee, Mike Dean, who is known for his on-field entertaining behavior will retire at the end of this season. From flamboyant cards to Tranmere celebrations, renowned referee Mike Dean has cemented his place in football history.

An official Premier League referee, since 2000, Dean has more than 500 matches under his belt. He also holds the distinction of sending off the most number of players in Premier League history, 114 to be precise. The 53-year-old is known for his showman-like manner and no-nonsense approach with the players and has presided over some of the division’s most important games. He’s apparently in negotiations with the Professional Game Match Officials (PGMOL) about becoming a full-time video assistant referee beginning next season.

In the last few years, English football matches have been officiated by some of the favorites of the game. Here are our top Premier League referees, so sit back and enjoy. Here we go!

No list of best referees will be complete without the inclusion of Howard Webb. Not only has he been a part of some of the most memorable matches in the league, but he has also taken charge in the 2010 UEFA Champions League and the FIFA World Cup with utmost sincerity. The 50-year-old man put an end to his illustrious 11 years in the field in 2014. During the aforementioned World Cup final, he produced a record-breaking 14 yellow cards and sent off Netherlands defender Johnny Heitinga, resulting in the Oranje’s extra-time defeat to Spain. Webb refused to dismiss Nigel De Jong for his infamous kung-fu kick on Xabi Alonso, although handing out a number of appropriate cards. On that day, the players made it incredibly difficult for Webb, but it didn’t stop many in the Dutch camp from criticizing him.

Martin Atkinson began his professional officiating career at the age of 16 and has since progressed through the ranks to become one of the Premier League‘s most well-respected referees. Since then, he has been a consistent presence in the Premier League, and his most noteworthy moment in English football came when he officiated the 2011 FA Cup Final between Man City and Stoke City. Since 2006, Atkinson has been a FIFA-registered official, and he is one of just a few Select Group referees who is also an Elite FIFA referee. He also officiated in the Champions League and at Euro 2012, when he teamed up with Howard Webb, a fellow Select Group referee at the time. Atkinson is one of the most merciful referees in the Premier League or at least one of the more lenient referees allowed to officiate the big games. He was in the bottom six of the 19 top-flight referees in terms of fouls per game, fouls per tackle, and cards per game last season.

Michael Oliver, at 25 years old, became the Premier League‘s youngest referee when he took command of Birmingham City’s match against Blackburn Rovers in August 2010, and he has remained a top-flight official ever since. Oliver’s meteoric climb through the Football League ranks resulted in his inclusion in the Select Group of referees for the 2010/11 season. His rapid advancement was recognized in 2012 when he was promoted to the FIFA list of referees, allowing him to officiate matches in the UEFA Champions League and Europa League, as well as international matches. The 2014 Community Shield match between Manchester City and Arsenal at Wembley was officiated by Oliver, whose father Clive was a former Football League referee. In 2016, he was the man in the middle again at Wembley, officiating Man City’s League Cup final penalty shootout victory over Liverpool.

After an eight-year career officiating non-league and Football League matches, Anthony Taylor has been a member of the Select Group of referees since the 2010/11 season. Taylor began his career as a referee in the North Premier League, where he worked from 2002 to 2004, before being promoted to the Conference. After only two years, he was promoted again and began officiating in the Football League for the first time. Taylor had been promoted to the FIFA officials list by this time, and he would referee the Capital One Cup Final between Chelsea and Tottenham Hotspur in 2015, before returning to Wembley for Arsenal’s 2015 Community Shield victory over Chelsea.

Taylor officiated a UEFA Euro 2020 group stage match between Finland and Denmark on June 12, 2021. Christian Eriksen, a Danish midfielder, collapsed on the pitch in the 43rd minute and required immediate medical attention before being taken to a local hospital and stabilized. Taylor was complimented for his cool demeanor while reacting quickly to the incident, signaling for medical help within seconds. [16] After it was determined that Eriksen’s condition had improved, the match was rescheduled until later in the day. Mentor Chris Foy credited Taylor’s prior experience in the prison service at HMP Manchester as beneficial to the situation. 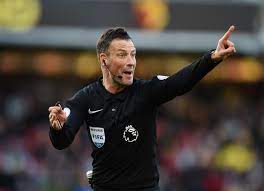 Durham-born Since taking command of his first Football League match as a 25-year-old in 2000, Mark Clattenburg has had a successful career on the national and international level. On that day, the former electrician was in the middle of Chesterfield Town’s match against York City, and he quickly rose through the ranks before being elevated to the Select Group of referees in 2004. Since then, he has been a regular in the Premier League, and in 2006, he was named to the FIFA list. Clattenburg’s international career took off when he took charge of a UEFA Under-17s Championship qualification in August 2008, followed by his first UEFA Champions League encounter in September 2008.

Clattenburg oversaw the men’s gold medal match between Brazil and Mexico at Wembley Stadium during the London 2012 Olympic Games. In the men’s football tournament, he was the only English referee. Clattenburg is regarded as one of the best referees in English football, having played a key role in Liverpool’s 2012 League Cup Final victory over Cardiff City at Wembley. Clattenburg capped a successful 2016 by officiating the UEFA Euro 2016 final between France and Portugal, which he was awarded best referee of the year at the Globe Soccer Awards in December. Clattenburg departed his post as a Premier League referee for a position with the Saudi Arabian Football Federation,[37] succeeding Howard Webb as the country’s Head of Refereeing on February 16, 2017.

Many consider Graham Poll to be the best English referee of the last quarter-century. The motivational speaker has managed 1,544 matches in his career, including the 2005 UEFA Cup Final and a few matches in the 2006 FIFA World Cup. The poll has written the book Seeing Red, which describes what life is like for a referee before, during, and after a football match. He has been described as contentious, opinionated, and “the most outspoken referee in the modern game.” This covers what happens in the tunnel before the teams take the field, what is said to managers and players in private, and what happens in the officials’ locker room.

The book also chronicles the World Cup incident that ruined Graham’s career as a referee, when he was sent off after booking a Croatian player three times. He was one of the most well-known referees in English football, with 26 years of experience and a habit of officiating the most high-profile matches. The Championship play-off final between Derby County and West Bromwich Albion on May 28, 2007, was his final domestic encounter. It’s unusual for a Premier League referee to receive appreciation.

Over the years, the English Premier League has seen a number of outstanding match officials who have taken the tough decisions and conducted matches in the most impartial manner possible. While the laws of football changed over time, and technology entered the picture, some referees remained the course and adjusted to the new conditions. Officiating in the Premier League is an onerous job at any level, with fans in the stadium and millions around the world tearing it apart. Of course, Premier League officiating is far from ideal, but it would be a mistake to disregard the excellent work of numerous officials throughout the years.

Capturing the Limelight for your Local Football Team

Football is a team sport. Having a team get recognized is completely an art on its own. This is called team management. There should be a systematic approach toward building a proper team as well as managing it to become […]

The Tactics that Win a Football Match in 2021

Football truly is a battle of chess. One simple mistake can take the game away during a football match. It is the game where miracles happen. But those miracles are not based on luck. It is sheer dedication, passion, and […]

“India ka tyohar”, TATA IPL is coming back to life this month. The fifteenth season of the most popular cricket league is going to be held from March 26 to May 29, 2022. The matches will be played in Maharashtra […]