Plot:  It has been eight years since Batman vanished into the night, turning, in that instant, from hero to fugitive. Assuming the blame for the death of D.A. Harvey Dent, the Dark Knight sacrificed everything for what he and Commissioner Gordon both hoped was the greater good. For a time the lie worked, as criminal activity in Gotham City was crushed under the weight of the anti-crime Dent Act. But everything will change with the arrival of a cunning cat burglar with a mysterious agenda. Far more dangerous, however, is the emergence of Bane, a masked terrorist whose ruthless plans for Gotham drive Bruce out of his self-imposed exile. But even if he dons the cape and cowl again, Batman may be no match for Bane. Brief Review for those lacking the patience:

Much like Prometheus, I loved a lot of it but there were many little things that niggles at the back of my mind that leave me coming away feeling it is something of a missed opportunity.

Fresh from re-watching the first two installments recently, I am practically nervous yet excited to witness how Nolan will put an end to this. Oh my. There’s so much riding on this one. The end of the Dark Knight trilogy. With all the hypes mounting up to the current moment, is this final chapter in the all-time beloved Christopher Nolan’s Batman trilogy a well-deserved one? Will this Nolan’s feature end the some sort of Hollywood’s “third-movie curse” that has been long inflicting much of the popular franchises (Matrix, Star Wars, Spiderman among others)? Or, more realistically, can this top The Dark Knight?

And so the Batman saga ends, not with a bang but an allegory.

When we first see Bruce Wayne, he seems to have aged 20 years. He has graying hair and a lined face, and walks around with a cane and a severe limp. He’s become a recluse, rarely leaving his mansion despite the urging of loyal butler/henchman Alfred (Michael Caine) to do so. You quit being Batman, Alfred tells him, but you didn’t start a new life. Bruce Wayne is baited in to donning the caped crusaders gown when Selina Kyle  (Anne Hathaway) cheekily commits a burglary at his mansion.  The villain in the movie is however Bane. Bane, played by Tom Hardy underneath a strange metal mask of tubes and 30 pounds of muscle he put on for the role, is a brilliant terrorist who’s utterly unnerving, but whose motives are never completely revealed. He emerges from a mysterious past, supposedly growing up in darkness inside a pit of a prison, and seems to have dedicated his entire life to destroying Batman and the city he loves. Why? We’re never really sure. Batman is in no condition to tackle this monster of a man, who not only has the power to smash the head of another with his bare hands, but also the mental ability of a genius!  However, Bruce Wayne’s arrogance and his confidence in his gadgets make him take on Bane in what is a huge let-down. As a fan of the Knightfall story arc told me (Lalith Nag – thanks for introducing this one to me), I hoped for a powerful visually stunning scene, but sadly it just wasn’t how I hoped it was.

What happens next is something to look forward to and revealing anything more here would spoil the movie for those who want to watch it. So I’ll stop here on the story front.

Nolan has filmed a great story here. One of the most memorable parts of the movie was the real music. The chanting that has been heard throughout the previews for the movie builds throughout the film and when it starts playing the audience starts moving to the edge of their seat. All of this served to help the audience follow a plot that at times can feel a little complicated.

When the action begins, it never stops. Nolan’s action and fight sequences continue to impress. The visual effects are the best of the series by far.

Even though the film is fantastic, there are always flaws. Similar to most of Nolan’s films, the score is too loud at times.

It’s notable that Christian Bale spends far more screen time out of the Batman costume than in. This is his best performance as Bruce Wayne AND Batman in the entire trilogy. 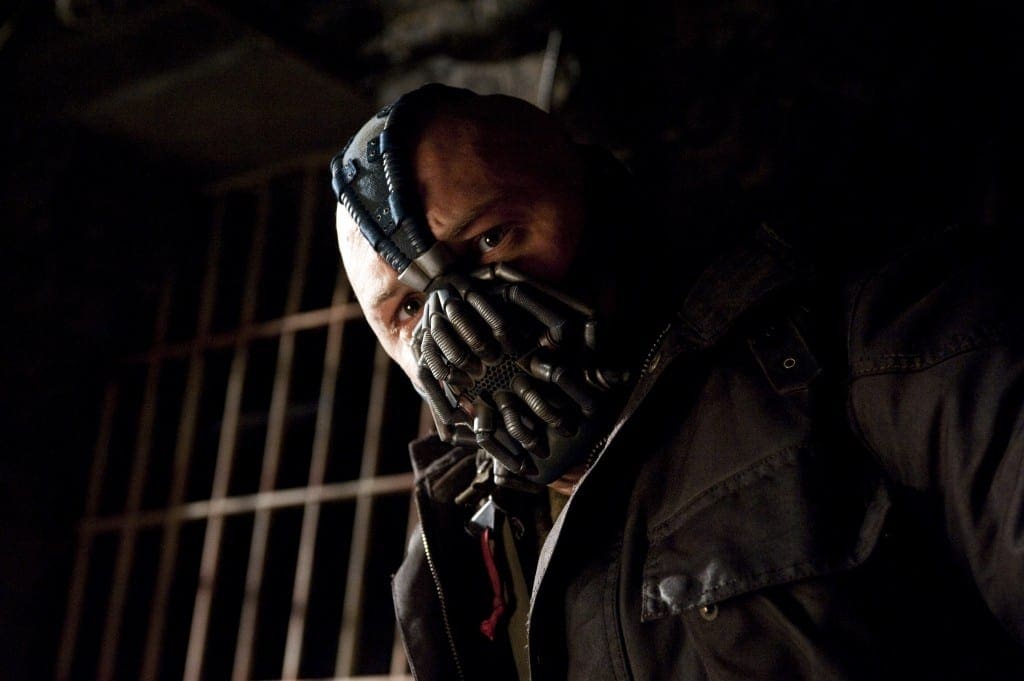 Tom Hardy is terrifying and menacing as Bane. Do not compare Hardy’s Bane to Ledger’s Joker. They are two completely different villains and performances. Hardy did a wonderful job at creating the character’s obsession with carnage. Only grouse however is the voice, which behind the mask is very unclear at times and a whisper most of the time.

Anne Hathaway as Selina, brings that peculiar menacing/devious touch that she displayed in her role as the White Queen in Alice in wonderland and has a chunky role.

Gary Oldman as usual is very reliable in his role as the aging commissioner of Gotham City. Morgan Freeman is great as he is always as Lucius Fox. The film reunited Inception stars Joseph Gordon-Levitt and Marion Cotillard. Levitt’s role is rather underwhelming and leaves much to be desired, except at the ending. Marion Cotillard has a small role which she has executed well.

But the actor who steals the show is Michael Caine as the trustworthy Alfred to Bale’s Batman.

In the end, The Dark Knight Rises does not reach the height of its predecessor but is still a potent movie that is smartly written, well-directed and well-acted. It also offers an epic and satisfying closing to one of the most beloved trilogy of all time with high ambition and visionary despite the bloated and perplexing multilayered story.

P.S.: If you’re planning to watch this movie, do watch the previous two before going in. Also, the scenes shot in India are absolutely breathtaking!!