When 2 hungry men had gone to Big Cinemas on a Sunday morning to watch Prometheus, the desolation in the theater did give the feel of another planet. The many people who had seen the movie had come in with their own little expectations and theories of creation. I for one was completely unaware of what the movie was about. And surprisingly, I came out liking it. Despite the second half being sprinkled with flaws and potholes the movie has a homogeneous idea lying beneath-it delves into deep questions about human origins, existence and creation. 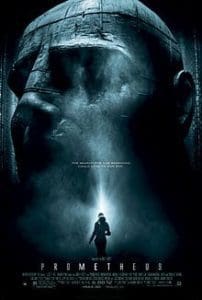 Michael Fassbender impresses again, this time as an android, with (emotionless) acting. The special effects is good in parts. Charlize Theron does little else other than slyly mouthing ‘Son of a bi*ch’ a couple of times.

Prometheus is like pine nuts – it tastes wonderful to start with, but the taste slowly starts waning away by the time you are done with it.

What’s Bad: Plot loosens in the second half, strays away from a brilliant start.

P.S (spoiler ahead) : For those of you who have seen the movie, I saw an exact pot like those organic ones at the Cherry Square restaurant, Mangalore. No kidding.

About Lalith Nag 11 Articles
A confused teen trying to play his part in this enormous clockwork called earth. Apart from being an aspiring Biomedical engineer, i'm a seasoned practioner of jujutsu and ninjutsu. Also, I like chocolate cakes.
Website