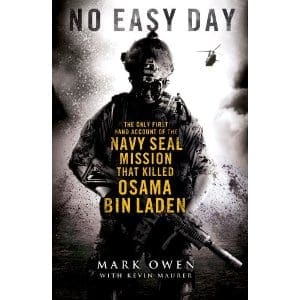 The book is written in average grade English, with lot of military terminologies, some photographs thrown in and what can be best described, in a non sensational manner. The book begins with the author declaring that none of the information shared has been away from public knowledge and which has been is non threatening to their army.

A major part of the book has been spent in describing missions by the author in Iraq and Afghanistan. For enthusiasts it is a good read on how these missions are carried out and one can compare them to the action movies that are made. Extreme details regarding finding Bin Laden in Pakistan is not shared, however CIA’s immaculate intelligence has been given lots of space.

The helicopter crash incidence, the bombed Black Hawk, has been described well and is good to know since it was veiled. The author has delved little bit into the politics of the mission, which is a welcome addition. There is no graphic detail of who fired the shot into the head of Osama, but details of how the body was carried to Bagram air base (one of the SEAL sat on the chest of Osama Bin Laden, for the lack of space), makes for the interesting parts of the book.

Overall it is an average book. It might dispel some theories, scandalizing ones, about the killing of Osama Bin Laden, but it does not have much that has not been in public domain. However the appreciable part is exactly that. It is a mission viewed through the goggles (and the 65,000 dollars night vision goggles) of a member of the US Navy SEAL.

Buy the book from Flipkart at 25% off the cover price.

About Sambit Dash 30 Articles
Other than teaching Biochemistry to undergraduate students of medicine i write, i research, i speak, i read...and i am passionate about these activities
Website Twitter