Before I begin expressing my views on the nature of our universe, I would like to thank my father for being the wonderful scientific influence in my life ever since I was a kid.  Most of us, myself included, can only remember key moments of our early childhood. For me, one of those key moments was my dad reading science books with me. As much as I wanted to prove myself in science without his help in my later years, deep down I always knew that if some scientific concepts come naturally to me, it was most likely due to my dad’s influence and not my brilliance. I truly believe that my scientific background enhanced my appreciation for the world that we live in. As explained by Richard Feynman in The Pleasure of Finding Things Out, the beauty of a flower is beyond the aesthetics of it as viewed from our eyes. There is another whole dimension of beauty hidden from sight. (For interested readers, follow the link to the book, and you can use the Excerpt feature of Amazon to read more about it or buy the book.) 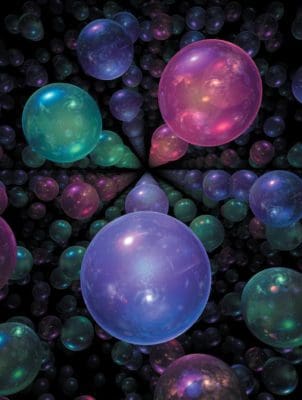 For as far back as I can remember, I have always wondered about the nature of our universe. More specifically, the question of whether the universe is finite or infinite always intrigued me. The funny thing is, even the best cosmologists in the world don’t have any more insights to the question than you and I. No pun intended, but for me trying to figure out the answer to the question was out of the question long ago. What’s interesting is that I find both possibilities equally disturbing. I mean surely the universe had to be either finite or infinite right? But both conclusions bug me a great deal, if I think about their implications.

Well, if the concept of the universe being finite is disturbing, the concept of the universe being infinite also doesn’t bond well with my gut instinct. How can something go on forever? I mean sure, I can imagine a world where it just goes on forever, but then the notion of big bang and a expanding universe has to be false then. There is no point in talking about an expanding universe if it’s infinite. And if it’s infinite, does it mean that there are infinitely many galaxies? If there’s infinitely many galaxies, then it must follow that there’s infinite amount of matter. There is something about infinite amount of galaxies and infinite space that’s really really disturbing.

So you think earth is rare huh? But if the universe is infinite, there is a definite chance that the same exact configuration will repeat itself. Sure, I hear you say that it’s impossible to find a star that is configured exactly the same as our solar system, but the beauty of infinite is that there’s only so many variations of system before it has to repeat itself. A system of finite number of atoms such as our solar system has a finite amount of configuration, if you have infinite many space to try different configurations, then it’s only matter of times before you will come across something that’s exactly the same. It’s like if you have infinite number of dice rolls, you will for sure have a lucky streak of the number “6? occur one million times in a row, no matter how mathematically impossible it is.

In fact, when there’s infinitely many rolls, you will hit this almost impossible configuration infinite amount of times! When you have infinity on your side, any almost impossible probability becomes a certainty. Armed with that knowledge, let me push the envelope even a little bit further, with infinity on my side, it’s only a matter of time before the universe has to repeat the atomic configuration that is me.

Granted, you will probably encounter lots of aliens that are not me before you come across one that’s exactly like me, but the mathematical nature of infinity makes ridiculous conclusions like this possible. Think I am nuts for reaching such conclusions? Feel free to read this paper written by a cosmologist at MIT. Alright, I know parallel universes are hard to imagine, so let’s ditch the possibility of having parallel universe. Doesn’t the mere notion of the universe being infinite sound semi-scary to you? Imagine you are traveling in a space ship, how unnerving to know that you can keep on going forever and ever and never reach its end? The concept of infinite space is just as hard to grasp as finite space.

To wrap it all up, as disturbing as it all sounds, the universe had to be either finite or infinite, there’s no room for it to be both, nor is there room for it to be neither. I wonder if humans will ever find the answer…