Summary: Mistress of Honour is a compelling read. The characters are life-like and the story is woven so deliciously around them. The language is light and breezy, without the hangover of complicated words and sentences. If you love reading, this book will make you want more. If you don’t like reading, this book will make you fall in love. The sort of book that will keep you in bed, despite many more urgent matters that may be pending. Bhaavna Arora, has previously written “The Deliberate Sinner“. I haven’t read that one, but after reading the Mistress of Honour, I have ordered it! 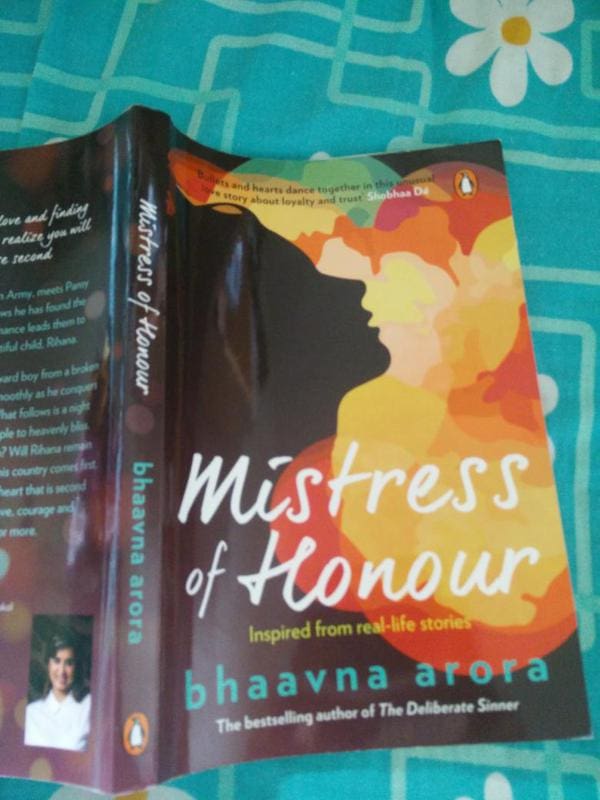 From the Book Cover: When Potnis a captain in the Indian Army meets Pansy during the Operation Blue Star he knows he has found the love of his life. Their passionate romance leads them to the altar and blossoms into a beautiful child, Rihana. History repeats itself when Advik, a wayward boy from a broken family, catapults into Rihanas heart, as smoothly as he conquers the skies as an Air Force pilot. What follows is a night of unabashed love, transporting the couple to heavenly bliss. Where will their unbridled love lead them? Will Rihanna remain a mistress to Advik, for whom the love for his country comes first or will she be able to make a place in his heart that is second to none? This heartbreaking saga of love, courage and sacrifice will leave you asking for more.

The story spans three generations of Army families and is a story familiar to most of the army wives and kids. How do I know this? I was privileged to study with kids, whose parents were in the army and this gave me a glimpse into what they went through, when their father was away.

The story is of Deepak Potnis, as much as it is about his beleaguered wife, daughter Rihana, his widowed mother. But it is not their story, it in fact, is the story of many of the army men who fight for this country without any fear or favour. The book is a fast and light read, but trust me, it will leave an indelible mark on the psyche. The author says that this book is inspired from real-life stories, even if she hadn’t, you would have no doubt that some of these stories have to be true.

Captain Deepak Potnis of the Indian Army meets an NRI with the nickname Pansy at the height of Operation Bluestar at Amritsar. He falls in love with her in a hail of bullets while trying to rescue her. She hates the Indian army, as she believes it is because of the army that she lost her parents during the operation. With the help of his best friend and confidante, Shamsher, The two end up getting married, only for Pansy to realize that the Army was, is and will remain Deepak’s first wife.

Their daughter Rihana grows up to be a young woman with a strong and beautiful outlook to life. She plays a role in seeing that justice is done to a Kashmiri youth whom she befriends on a visit home to Srinagar. As she grows older, she is drawn towards a college friend, Advik who aspires to be an Indian Airfce pilot.  The theme of the story is romance, but you will realise that the romance is in the yearning of the army families for their husbands, fathers and sons. This book,  ‘Mistress of Honour’ is their story, it is classified as a Romance novel, but it does not fit perfectly in that genre, maybe Wartime Romance would be a better fit!

What I liked about the book

Buy or Don’t buy?   As mentioned in the title, this one is a keepsake!