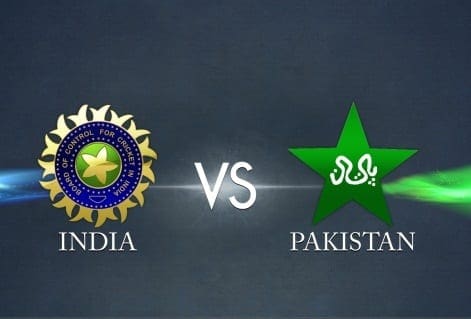 Finally, the big day has arrived. It’s India vs Pakistan. I’m in my hostel TV room. The nerves have returned full force, after a 5-day gap. Dhoni wins the toss and decides to bat. I don’t approve of the decision; India haven’t lost a game chasing in this tournament, while they’ve lost one and drawn one after batting first, and having scored totals on either side of 300. At this moment, Dhoni discloses that Ashwin, the promising offspinner has been dropped for…guess who…Nehra, the dude who screwed up against South Africa and didn’t play any game since then. Not a good start, I think. Nehra shouldn’t have even been in the nets today. In the interim, a friend persuades me to come to Cosmo Cafe with him to watch the match- I am not so sure as I’ve faithfully watched all of India‘s world cup matches in our TV room, and don’t want to jinx the occasion. My friend, however, leaves me no choice, and soon I’m in a huge hall with an equally enormous screen where the match is being telecast. The hall, however is full of people and we have no choice but to go to the back, which makes watching the score difficult. But when Sachin and Sehwag stroll out to the middle, that doesn’t matter- nothing matters any more, but the cracking contest that is unfolding in front of us. Umar Gul has the new ball; he’s known to be a strike bowler and a partnership breaker. Sehwag takes guard to him. This is a bit surprising, but I’ve never been anxious while watching Sehwag bat; maybe it’s because his naturally attacking game always gives bowlers a chance to get him out; or maybe because all of my focus is at the other end. I’ve always been a fan of Sachin ever since my childhood days. Over the years he has become a run-scoring phenomenon, combining his aggressive strokeplay with dogged defence to become almost un-outable, as Ricky Ponting once put it. It’s a fact that Sachin’s biggest fans are the most nervous when he bats, and so am I. Sachin has been in tremendous form in this world cup, as in other world cups, and this is what scares me. Maybe the law of averages will catch up with him, a traitorous part of my mind whispers. Sachin plays out his first ball. I breathe a sigh of relief. The first two overs are quiet. Then Sehwag decides that enough is enough. Umar Gul is flicked through midwicket, worked away past square leg, smashed through point and bludgeoned away through cover, all in the space of 6 deliveries, as Viru goes beserk. 21 runs in one over(Five fours). Me and the crowd, both at Mohali and in Cosmo Cafe, are out of their seats. The Paki bowlers are feeling the heat-memories of world cup 2003 are coming back to haunt them,as good-length balls outside off-stump are sent screaming to the fence by the best hand-eye coordination in the world today. Sachin gets into the act, playing a gorgeous cover drive that sends the ball effortlessly to the boundary. We are up and running. The party doesn’t last long, however, as Wahab Riaz, a greenhorn, traps Sehwag in front. I’m not surprised, but I do feel a twinge of pain, as Viru goes back to the pavilion. Gambhir comes in and the pace slows down- consolidation is the buzzword. Meanwhile Sachin hits a few boundaries to maintain the run-rate. Suddenly there’s an LBW shout against him- it’s out- I am devastated-No wait, it’s not! He takes the review and the ball’s comfortably missing leg; I join the bandwagon and abuse the umpire. It’s not over-the very next ball, he’s almost stumped. I keep my head down after that. I can’t bear to watch Sachin batting, I am too nervous. He’s not in the rythm today. for some reason, he seems to be struggling. He’s dropped four times…wth is Pakistan doing…Afridi cannot believe it, I cannot believe it, nobody can. Meanwhile Gambhir departs- Kohli comes in and looks unconvincing-the run rate begins to drop….this was supposed to be a batting pitch-whats happening now-I wonder.

Wahab Riaz returns and dismisses Kohli. Yuvraj comes in, takes guard and is clean bowled by a 148 kph yorker first ball. I am now officially in shock, and so is his home crowd. Dhoni comes in. More consolidation. Sachin gets out after scoring 85 workmanlike runs-atleast nobody can say he failed now can they. Dhoni follows. Raina and Bhajji start to attack, but i figure it’s too late, ‘cos 300 is out of reach. We end up at 260, thanks to Raina, but hope is scarce, ‘cos it’s d same score dat we chased against d aussies in the quarters.

I’m back to the hostel now. The Paki innings starts. Kamran Akmal hits Zak for two fours in the first over. That’s it, I think. We are going to lose. I go back to my room. A bowling attack that can’t defend 338 has no chance to defend 260, I think, especially with Munaf and Nehra in the team. I go back to my room and start watching a movie, checking the score online every five minutes. We take a wicket. And then another. There is some hope in me now. They are going at 4.5 runs per over. Decent, but not nearly enough to win. i go for dinner in an almost empty mess. I come back, and see that Pakistan have reached 100. The commentators reckon that it’s smooth sailing for them now. I start losing hope. Yuvraj, that swashbuckler comes in and takes a wicket. Not one but two. The TV Room erupts in a roar. Hope is restored. They have gone from 103/2 to 106/4. We have a chance. The next few overs are tight. Then Umar Akmal decides to target Yuvraj. His next two overs go for 21 runs. I am scared, and the TV room is silent. Umar is a dangerous player. We have to get him out. They have reached 143/4. it’s now or never. Dhoni replaces Yuvi with Bhajji. He immediately responds by clean-bowling Umar Akmal. 143/5. Cheers fill the air again. Razzaq comes in. My God, do the Pakis bat deep. There is a partnership, but their run rate is less. They need 8 per over now. Munaf has been a revelation in this match. He has bowled with fire and passion, and the Pakis haven’t been able to get him away. He cleans up Razzaq with a beauty. Yet another example of players giving their best in India–Pakistan games. Afridi comes in and immediately hits a four. Everyone’s one the edge of their seats. However, Nehra and the spinners keep him quiet, and the run rate climbs again to 9 an over. Bhajji comes back, and Afridi holes out in the deep. I am relieved-now I feel that we have the match in the bag. They need 61 runs in 5 overs with 3 wickets left. Due to some superb bowling by Zak and Nehra(!), that becomes 51 in 3. Misbah finally wakes up from his test match-induced sleep and goes aerial, hitting 14 runs in Zaheer’s penultimate over. It’s too late, however, and too much milk has been spilt. Zak comes back for the last over. They need 30 in 6 balls, then 30 in 5, then in 4. Misbah can’t stand the humiliation anymore. He holes out to long on. India has won!!! The TV is blocked by atleast 100 people standing up and going beserk, cheering their heroes and celebrating India‘s entry into the World Cup Final. BLEED BLUE!! is the phrase! At the presentation, both captains are all smiles. Sachin is, fittingly, the man of the match, for his battling innings in difficult conditions. There is pandemonium at KC. Indian flags are out. There is dancing, screaming, yelling, and a generally ingnoring the Campus Patrol. India 5 Pak 0. This is the record in world cups. It has been maintained for the past two decades, and is now one of the constants in world cricket. I won’t be sleeping tonight. Today has been a spectacle of cricket. A great advertisement for the game and for India– Pak relations. The Sri Lankans await at aamchi Mumbai. All I can say is….GO INDIA GO!!!!!