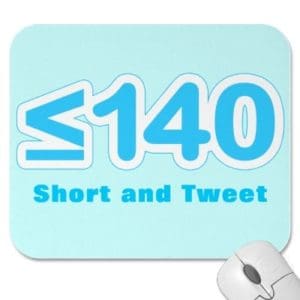 Expressing ones thoughts, reading news, reaching out to friends (or foes) are happening in recent times in 140 characters. When -bo. (the newly re-elected American President) used Twitter to declare his victory, it went into the pages of history because of the Twitter frenzy it created. Twitter, the social network, provides for a mere 140 characters to write your message at once. Like it or hate it, it is as it is.

With the internet providing for a major platform for expression, Twitter has set itself tad apart. While most other networks have space limitation when it comes to writing your message, your views, or whatever you wish to, Twitter has set itself a relatively low limit of 140. If there is any story behind the magic 140, I am unaware of it. But at the face of it, 140 characters seems constrained. The lone positive feature could be fostering of comprehending ability, but the tweets generally suggest otherwise.

If you wish someone happy birthday, probably that much of space will suffice; but if you are out to write about the massive expense that the US elections involve, 140 might fall short. Therein comes the ‘difference’ that Twitter provides. You may send links (remember within that 140 limit) and direct someone somewhere, but just cannot fit it all on Twitter.

However, the high popularity of Twitter is suggestive of many facts. probably it suits our decreasing attention span. Lenghty analysis is not the cup of tea of Generation M (multitasking generation). When a message is short it usually tends to be in some polarity, i.e the message will usually pain a picture in black or white. The missing of grey in discourses today again finds relevance perhaps in the Twitter age.

PS: a link of this article will be tweeted 140 characters

PPS: Even the whole article will be summarized in less than 140 characters and Tweeted.