My journey at Manipal Institute of Technology began on the fateful day of July 30th 2014. The day seemed bright and sunny, quite unlike what you are likely to experience if you get to Manipal at that time of the year. Parents and students were given accommodation in the hostels till the completion of admission procedures. I got to the room, freshened up and looked outside the window. It was raining. It had only been an hour since I had reached, and I had already been greeted by rain. And this rain became a major part of life at Manipal for the first couple months. It’s said that in Manipal, if you forget a phone and an umbrella somewhere, you are more likely to find the phone. So, get umbrellas, 2-3 of them, when you come to Manipal. Carry them everywhere and keep them safe. Very very safe.

I’ll skip the part of the admission procedures, because all that included was standing in lines and getting documents, etc. verified. After the admission procedure, we were asked to go to AB5 for completing some more formalities and after asking some people, I managed to get to AB5. I remembered I had to go to the first floor, and since you generally enter a building at the ground floor, I went up one floor, and I could not find the room I was supposed to go to.

Mistake #1. If you are entering AB5 you enter on the 2nd floor, not the ground floor. So if you have to go to the 1st floor, you go down one floor.

I was given a copy of my timetable and upon glancing through it, I saw a word that is dreaded by most engineers. BIOLOGY. Yes, there was a subject Biology for Engineers in the Chemistry Cycle. On looking a little more carefully, I realized the first class I had as an engineering student was Biology for Engineers. *Wipes sweating forehead*. Also I noticed my section was ‘Q’. Now since I came from a school that had 22 sections in 11th and 12th, ‘Q’ section was not something unheard of for me, but I know a lot many people who were overwhelmed seeing sections like ‘L’.

I said farewell to my father on the evening of the 31st and checked in to the hostel. Block 5. Everything seemed quite. There were a few people walking around, mostly to go to the washroom. (Block 5 has common bathrooms.) The hostel didn’t seem like it had 200+ boys staying. Perhaps that was the only day in the one year that I stayed there that the hostel was quite, for come the next day, everyone had made friends and you could hear laughter, loud voices, guitars and singers.

Classes began on the 1st of August. To mark the beginning of a new life, I woke up at 6:00 a.m. and took a bath. And so did everyone else. There would be a line for the bathrooms in the morning because almost everyone took a morning bath in those days. The number of people who continued to get up and take a bath before the 8 a.m. class however began dwindling quite rapidly after that. And by the end of the week, I too gave up. 30 minutes extra sleep over the early morning bath? Any day.

I got to AB3, where first year classes take place at 7:30 and I could see a lot many people already there. I spoke to a few people, started making friends and settled inside class by 7:40. I decided to sit on the third row, because it was somewhere in the middle. (Within a week, I ended up in the last bench). Class was filled by 7:45. However within the next few days, classes would remain empty till 7:50 and the last row seats would fill first. There were 80 students in the class. Double of the maximum class strength I was previously a part of and that seemed a little intimidating. The classrooms had air-conditioning and within an hour, it got quite cold inside. I made a mental note to get a sweatshirt for the next class. All classes on the first day were introduction classes where we had to say our name, branch, hometown etc. We also got the Saturday off, because lab classes were scheduled to begin later.

The professors who we had were pretty good, and taught the course material clearly. My section-mates were friendly. I made the section WhatsApp group (every section had one) and the group was pretty active the first few days. It was just the kind of beginning I wanted for my college life.

Early Saturday morning, I decided to take a walk around the place, but I could not go out because of the rain. The first of many plans that would be marred by the rain in the days to come. Hence, if you are making any plans do not forget to include an ‘in event of rain backup’ as well. When the weather got a little better, I had my breakfast (food was pretty okay the first few days) and decided to go buy the books the professors had told us about. There is a bookstore called ‘Kamath Bookstore’ in the campus near the food court which sells used books at low costs. I went there, told the anna (bhaiyya in Hindi, and I had learnt within one day that you don’t say bhaiyya, you say anna) Chemistry Cycle and got a lot many books. 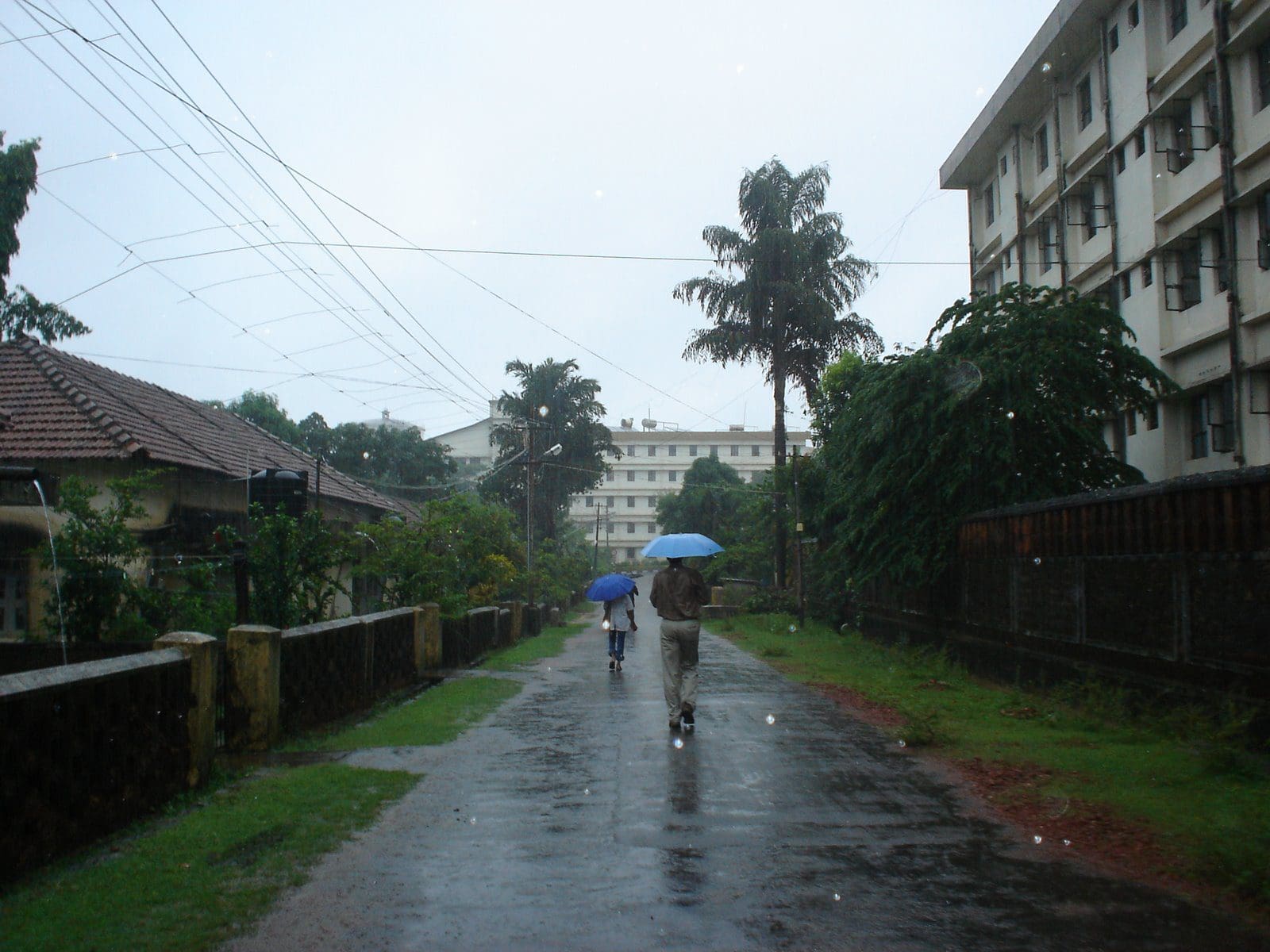 Mistake #2. In Manipal, you will hardly use books, all study material will be provided to you in form of pdfs and ppts. So don’t buy your books as soon as you get to college. Only buy them if you feel the material given is not enough.

Mistake #3. Never venture into AB2 alone, unless you are confident you know your way, which I think is pretty improbable.

In the evening, I along with some new friends, played football. (I don’t play football, but I decided to give it a try anyway.) It was a unique experience, the ground was all muddy and slippery, it was raining, we were falling and from football, it became a game of do not fall. I also wanted to join swimming and for that I had to make a payment. So on Tuesday when I had classes in the second half (classes from 1 pm) I went to accounts section around 10 am to make the payment.

Mistake #4. When you have dues to pay, it is highly likely that many people will have dues to pay, especially at the start of the semester and just close to end semester exams. Therefore to avoid long lines, go to the accounts section around 10-15 minutes before it opens.

In the first year, we had two full days in a week. On full days you will have three/four hours of classes and one lab for three hours, and full days are exhausting. So if you have a full day, try to get a little extra sleep the night before.

There is a lot to explore in Manipal. There is something for everyone. And the first few weeks are the best time to explore, since as time progresses, you will either get busy or get lazy. There is a lot to see and experience. I along with my friends explored a lot in the first week and we were overwhelmed by how much there is to Manipal other than colleges. Although the heavy rains may make you feel gloomy, don’t let it hamper your inner adventurous self.

When you come to Manipal, you’ll need to bring a lot of things like mugs, buckets, soap, shampoo, etc. and bringing them from home will be a pointless exercise because everything is available at ‘Campus Store’. There are two inside the campus. (One is actually Book House, but we know both as Campus Store). One is near Block 3-4 and the other is at KC. (Kamath Circle), which can be called the heart of the campus. It’s where people meet up before setting out anywhere. Apart from the store, KC also has KC Canteen, Snack point, the fruit shop, two more shops and the food court.

To conclude I will add a few tips for freshers who will be joining us soon.

Manipal is an amazing place, MIT a wonderful college. Every moment you will spend here, you will cherish for a lifetime. It’s been over a year since all that described above happened and as you can see I remember everything so vividly, and you will too. Come be a part of the heritage and the culture. A journey of a thousand miles begins with a single step, and you have taken the right step by joining MIT.

Disclaimer: I am a second year student at Manipal Institute of Technology and since it is admission season, I am sharing my experience as a fresher at MIT. Although what I have described below applies mostly to freshers in the engineering college, some of it is general and maybe of use for freshers joining the other colleges as well.