The admiration that you shower on me is so much that no language barrrier is strong enough to keep us apart! – PM Modi

The Labour Day holiday was no time to rest for the Udupi BJP karyakartas as a thousand of the city’s youth lost sleep in readying the MGM Maidaan for one of the biggest rallies the town has seen in recent history. With the State General Elections less than 2 weeks away, the party was holding nothing back in getting the word out. All the city could talk about even as scores of students dodged the traffic to get home fast, was, “Modi Barta Iddare!” (Modi is coming)

A 1 lakh strong crowd sat there waiting for the Prime Minister, some since the morning, braving the heat and sun. Volunteers were hard at work serving water and buttermilk to all attendees eagerly waiting for the proceedings to begin At 3 PM, the man made his way to a huge chorus shouting ‘Namma Modi’ to take his place atop the stage and was honored with a ceremonial wreath and a Yakshagana crown. Something that has become his defining trait in every public address, the Prime Minister began his speech by speaking to the crowd in the local languages of Tulu and Kannada eliciting a thunderous response from the crowd. The translator who came up on the stage to translate PM Modi’s speech was sent back by the enthusiastic crowd egging the Prime Minister to continue speaking without breaks in an awkward moment that saw everyone on stage including the PM himself, break into smiles. 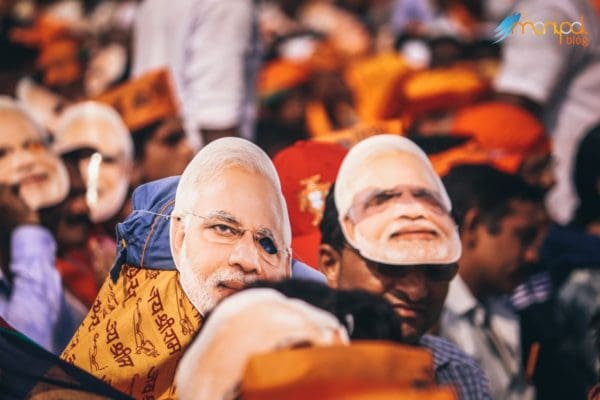 Taking many a not-so-subtle digs at the ruling Congress Party and its National President, Mr. Rahul Gandhi, the PM called the sitting Chief Minister Siddaramaiyah for taking the state for granted and not delivering on its promises. “The deaths of so many BJP Yuva Karyakartas have pained me and it is shameful how the Government has turned a deaf ear to their families’ pleas” the PM calling the Congress Government incompetent and not fit to govern a bountiful state such as Karnataka. On one side, the government at the Centre is bringing out schemes for Ease of doing business. But in Karnataka, they are not interested in Ease of Doing Business. They (Congress govt) believe in Ease of doing murder. This is the culture they have developed – PM Modi.

Remembering Dr. TMA Pai, a day after his birth anniversary, PM Modi paid his respects to the visionary who laid the foundation for the educational empire that is Manipal! “Everyone calls Udupi, the land of the temples, but what they forget is the city’s immense contribution in the banking sector, he added lauding the efforts of the Undivided Dakshina Kannada that gave India 5 primer National Banking institutions in the form of Syndicate Bank, Corporation Bank, Vijaya Bank, Karnataka Bank and Canara bank! In an hour long speech that was lapped up by the crowd with renewed energy infused in them after the arrival of the PM, much was said that the city and its residents are going talk about for a long, long time!

About Navaneethcrshna 36 Articles
Mildly entertaining, occasionally funny, and something pretentious 'coz the first two are too mainstream...