My job with the Marketing Research Department of Hindustan Lever Limited entailed extensive traveling in five states (Maharashtra, Gujurat, Madhya Pradesh, Goa and Karnataka) of India. In the 50s when I joined the company, not many ladies ventured to take up jobs involving touring which made it necessary to be away from home for long stretches of time. Also, the outings were of an adventurous nature. The company took great care and made excellent arrangements for our stays at comfortable and safe places.

It was in the late 50s that my two colleagues and I were in Gwalior (Madhya Pradesh) to conduct a rural survey in surrounding areas. We stayed at Gwalior Hotel. In 1947, due to Sardar Vallabhai Patel’s efforts, all the princely states except two joined the Indian Dominion. Close on the heels of the unification, Gwalior Palace of Scindias was converted into Gwalior Hotel. It was a magnificent building with the best comforts a hotel could afford in all respects. 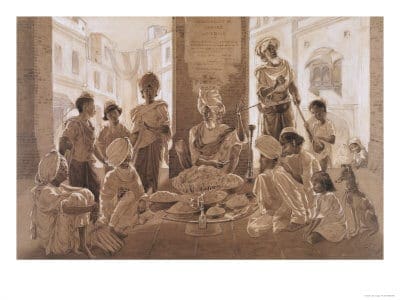 Every day we covered several miles by car in the scorching heat of summer. The roads were dusty and rough. One day after the hard work, we returned to the hotel in the evening. We were relaxing on the beautiful green lawns when the bearer of the hotel brought ‘masala tea’ for us. We asked him whether he could get onion ‘pakoras’ to go with the tea. Within a short time, he returned on his bicycle with packets of onion and potato ‘pakoras’ that were crisp and tasty. He told us that he got them from a well-known, popular place in the ‘Camp’ area where a variety of sweets and snacks were available. He rattled out all the items on the menu card with descriptive adjectives. Our mouths watered. The next evening we planned to visit the Camp area and sample some of the fresh items. The bearer sent a word in advance to the shop owner that we would be dropping in.

We booked a ‘tonga’, a horse-drawn carriage, to go to the place. Autorikshas were not in existence then. As we approached the place, the first thing that caught our attention was the open gutters with multicolored flies hovering and making buzzing sounds. The shop was situated on one of such places. A variety of sweets like ‘rasgulla’, ‘jalebi’, ‘kala jamun’, ‘gulab jamun’, ‘laddu, ‘pedha’, etc. were displayed in a big glass case. Flies had entered in the case from some side apertures and had comfortably settled down on the goodies, relishing the sugary fare.

We were disgusted with the sight and were about to return to the hotel rooms when the owner, Mr. Sharma, came out hurriedly and modestly extended us an invitation to come inside and taste some of their specialties. We did not have the heart to refuse his sincere request and hurt his feelings. Mr. Sharma was particularly proud that ladies from Bombay, that too from a prestigious company, were visiting his shop. We got out of the tonga and climbed the flight of steps over the gutter and entered the shop. It was a small crowded place. A fair-complexioned cook was making ‘puries’. He was wearing a dhoti that was rolled up to his groins, ala Fruit of the Loom briefs. He was sweating and did not have a shirt or vest on. He was sitting on the floor with his legs stretched out and the board for rolling puries held between his legs. He took out small portions of dough rolled out in round disks of two and a half inch diameter and neatly arranged them on his thighs, ready to fry.

Nearby on the stove was a big frying pan with pure ghee, which emanated buttery flavor. He carefully dropped each rolled-out puri in the frying pan till they were lightly golden brown. While we were watching, Mr. Sharma was waxing eloquent with his running commentary. He took pride in mentioning that they use pure ghee and not ‘Vanaspati’ –hydrogenated oil – and how they catered to VIPs including Maharajas of the erstwhile state. We were in an extremely awkward position. It was difficult to comply with his request having seen the unhygienic surroundings. We thanked Mr. Sharma for his invitation and excused ourselves by saying that it was our day of fasting and added that we would visit him on another occasion.

After the incident we were in Gwalior for a few more days. We cautiously avoided the Camp area lest we might fall “victims” to Mr. Sharma’s rain check. What an anticlimax from State Guest House to Sharmaji’s Sweetmeat Shop!

This is a guest post by Radha Golikeri, Houston, Texas.