So he had continued for six hours, walking aimlessly and giving no thought to anything other than his own tortured self . . . he was, of course, lost. Lost . . in the very big, very dry, very deadly Thar desert. And while this seemed to suit his purpose, he could not help feeling somewhat uneasy at the dryness that covered his throat like a sandpaper blanket. He knew what this desert could do to a man who did not respect it. And as he did respect it, the insanity of what he was doing rang even clearer in his mind. But even as he thought of this, the intense heat forced its way through his skull, and into his brain, where it began the slow work of transforming all his ordered blacks and whites into a muddled confusion of gray.

His reason for beginning this journey, that could have only one end, was now little more than a fleeting shadow in the mist of his fading memory. But he still remembered. He had to. 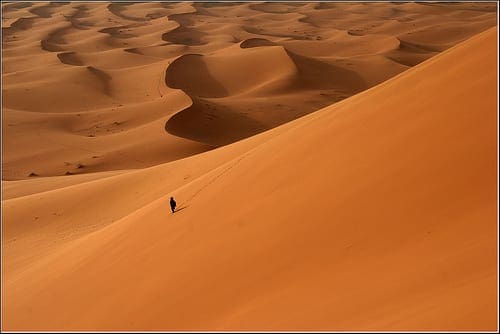 It seemed strangely humorous to him now. That something as common, as everyday, as inconsequential as an argument, could end in this blind rush to self-sacrifice . . . “sacrifice to what? . . . the god of meaninglessness?” he asked himself, chuckling softly. He knew he was becoming delirious — the first stage. He wondered why he had bothered bringing his revolver along. Could it be he didn’t trust the desert to do the job in a thorough enough fashion? “You’ve got to be kidding, Tiwari.” And a moment later the weapon was hurtling through the oven air to an unknown destination. But he could not forget it. Why did he bring that gun? The thought consumed him now in the way that a small match consumes a huge mound of dry leaves. The desert is more than enough . . . why did I bring the gun? He repeated this sentence again and again until it became meaningless, and then he forgot it.

An hour passed. He had found a large rock and here he sat, being baked from all sides at once. He felt compelled to move and that feeling bothered him. Why should he move . . . was this not a fitting place? . . . no, he answered himself.

From the corner of his eye, he caught a glimpse of a lizard ripping across the dry, dead ground and kicking up a trail of dust that lingered for a moment after the little beast had disappeared. Without knowing why, Tiwari decided to follow it. For the rest of the afternoon he zig-zagged the desert floor in the manner of a man possessed, his eyes always to the ground.

The lizard, apparently frightened past the point of insanity by the frantic chase, did not slow down as it approached its familiar desert pond, but dived headlong into it.

Tiwari stopped, staring down at his own disbelieving expression. He slowly knelt and began to drink the cool, clear, underground spring water. He splashed it on his face as he felt life in his veins once again.

As he rose from the pond, he lost his footing on a wet rock and severed a vein in his left leg. He quickly bandaged it with a piece of his shirt, but it had bled heavily. He felt drowsy, and within a few minutes he was asleep  on the bank of the pond.

He awoke in the morning feeling refreshed and immediately went for more water. As he drank, he imagined, or thought he imagined, a slight crack of twig or kicking of stones behind him, but he finished drinking.

When he turned to rise, he found himself, staring into the hunger crazed eyes of a desert lion that had smelled blood and come for the kill.

Tiwari reached for his gun.