Every year, the Manipal University Cultural Coordination Committee hosts the Inter-Collegiate cultural festival ‘Utsav’. It is meant to showcase and acknowledge the best talent our university has to offer. This is what I used to believe in until I started to see the reality which goes on behind the curtain.

I am a student of MCODS-Manipal and it is the vantage point from where I speak. The article is solely my opinion and no staff/coördinator/student is involved in voicing these thoughts. Readers already judging my experience/competency to write on this subject need to know that I have been a part of 5 Utsav competitions, participated in 24 events and won in 15 ( 9 gold, 3 silver, 3 bronze); 5 alone this year.

Every year there is a wrong judgement about certain events. The audience knows it, the participants know it, the coordinators know it; but no one does anything to correct the wrong. There may be a complaint filed by the coördinator in question or even a heated debate over the judgement, but nothing ever really changes. This year I saw the same conundrum repeat itself and just couldn’t keep quiet anymore. I am a mere student and therefore cannot file anything official which is why I use the medium of ManipalBlog.com to voice what I saw through my eyes.

This year MCODS Manipal mounted its most aggressive offense so far. The race to the top was the fiercest this year with 4 colleges fighting edge to edge until the last day. KMC Manipal was clearly the overall champion when the 4th day began and deservedly so, leaving 3 colleges to fight for the remaining 2 positions. This is when things got murky. The events which may have changed the tide in favour of my college and where I suspect foul play are as follows :

Singing a medley is always tougher than singing one song for 4 minutes. And if the medley is sung to perfection, it does hold an edge over the rest. That is what the team from MCODS Manipal did. A beautiful medley sung to perfection to wow the audience. But the judges seemed it fit to award the prize to other teams who had a crack in their voice while singing and even misplaced their sur and taal.

This is the entry put forth by the MCODS Manipal team, Slot 2. Everyone around agreed this was the best of the lot. The same team had represented the college in this event twice before and won some place or the other in the final standings. This year they came out with their best work yet. If any reader wishes to compare, please contact your college team for the photograph of their respective entry and compare it yourself with the one above.

The rules haven’t changed since the earlier years and writing on clay is not a disqualifying feature. Why did it have to happen that very day when my college needed these points and were clearly the winners in this event? Were the judges so blind not to see what was right there in front of their eyes ?

(Editors Note: Portion of this text has been modified after consultation with the author and new facts that have come to light since the article was put up. The author apologizes for any words that may have disrespected or hurt the sentiments of any individual named in the article.)

None of the teams which wowed the audience won. As far as my college goes, we have been disqualified year after year for a vulgar script. This year it was changed and a very strong performance, worthy of being in the top 3 was put up. However, this was one event which saw even the other top acting teams sidelined. The judging criteria? Perhaps for them the event was Sad-ads. 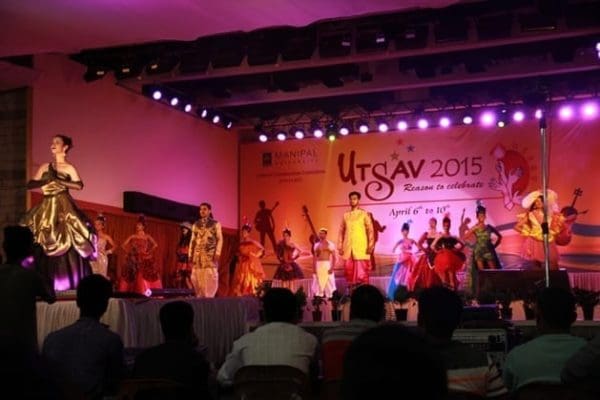 This was the boiling point. Three of the top 4 colleges needed to win the event in order to finish on the podium. The above picture is a snapshot from the finale of MCODS Manipal team, Slot no.4.

A wow performance: This is the reaction which this team received after they performed. No one in the entire audience (and I don’t mean just my college) could have dreamt to see this team not placed in the top 3 at all. But this is what happened. Readers are requested to once again contact their respective teams for photographs/videos of their performance and compare it with the one by this team.

Foulplay?: Without a shout of a doubt, the team from MCODS Manipal had the best dresses and had done justice to their theme. Not only our college, but others as well acknowledged this fact and it was a shock to everyone when we weren’t awarded any position. Points from this event would have meant that we stood on the podium in the final 3, but that is not what happened. The team which stood first (Slot 9, KMC Mangalore) had a disqualification. A model had dropped his hat onto the stage which is subject to disqualification, but was not done so. Moreover, Charlie Hebdo is a magazine which has desecrated an entire religion time and again but were glorified on stage and accepted by the judges, just like the walk of peace in Paris which in itself was a media stunt. Furthermore, why were the judges constantly approached after certain teams performed? Aren’t they supposed to be let alone to judge?

The performance from Slot no. 4, MCODS Manipal was award worthy that night. Blame it on the incompetency of the judges or a foul play which happened afterwards, but something went wrong that night.

Readers are welcome to support or critique this article. I had no other medium to voice my opinion other than this blog. If anyone would like to correct me or say anything against, please do so in a civil manner; I believe we have all grown past the choice expletives we used when we were adolescents in school. I am open to a mature and healthy discussion on the topic. I understand Utsav 2015 is history now, but someone needed to take the axe and speak up. It just happens to be me.

Editors Note: The author wishes to sincerely apologise to any person named or unnamed in the article who has been hurt by it. New facts have been put forth and Mudit wishes to state that this UTSAV was by far the best organised and with the least amount of discrepancies ever.

About the Author: Mudit Krishna Yadav is an intern at MCODS, Manipal. He has participated in almost all the UTSAV competitions since he joined Manipal University and has won many prizes in them.