Manipal is a university township. Yes, it is a cliche. What many however do not realise is that Manipal is also a gastronomical delight. To cater to the varied tastebuds of the thousands of students occupying this tiny town, there are innumerable restaurants (probably, the highest density of restaurants in a tiny 3 mile radius) you will find anywhere.

Each year, many restaurants open and many shut down, bringing in new flavours, and taking away old ones. Here one of our readers lists the 25 places and foods of Manipal that are a must try in 2014-2015.

1. Seven Beans: A new addition to Manipal, Seven Beans lies exactly opposite that quintessential Manipal watering hole DeeTee. What Seven Beans provides is an ambiance par excellence and pure vegetarian delights that will tickle your taste buds. Conceived as a hangout place for students after a tiring day at college, the place provides a lounge, a garden sit-out, an open kitchen, a mini-library and a conference room for students to work on their projects. Throw in the delicious chocolate drink (try the Gooey chocolate) and you have a winner!! After TITOS GOA, it’s SEVEN BEANS, MANIPAL. Order anything on the menu! Slurp… Gulp! 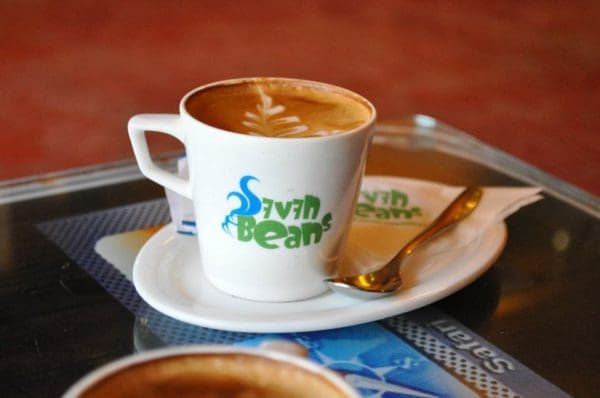 2. Grab-a-Bite: Located at Lakshmindra Nagar on the road to Udupi, this place produces a dish called the Mushroom Masala frankie that is simply awesome!
3. Hotspot: This eatery opposite Domino’s has made it to every list on ManipalBlog for the places to eat in Manipal. One note though, you go here for the food and food alone .. what that means is service is bad and may be non-existent. This year we recommend the  Egg Biryani at HotSpot Manipal!
4.Sirocco coffee valley/KMC food court: The Scirocco eat outs are present in two places, the KMC food court and also at a separate garden style place opposite the Madhav Pai memorial park. The thing to try here is the Pasta! You pick ANY PASTA!

5.Your Choice: Not so famous a joint, caters mainly to the Malaysian community in Manipal. The meals are basically for non vegetarians. So if you have a vegetarian in the group, lunch will be out of question as the menu is available only after 4pm. Try the Alu Bhurji, egg masala and egg cheeze sandwich.

6. Ganoderma Mess: Closest to home food – the rotis are not rotis… They are phulkas which we make at home, and yummy curries everyday!

7. Tiwari Chat next to Venugopal temple is awesome for Gulab Jamuns 😀 and litti chokha! But if you want to have Puchka, the one in front of Neptune store Tops it. You NeeD to have it, to BelievE it!

8. Basil cafe: One of the oldest cafe in Manipal, this year they have gone for a total overhaul with more mexican style food. However the Irish Coffee here is a must try!

9. Manna’s Rolls: Double Egg, Double Alu, Double Mushroom. (Do ask him to customize according to your taste).

10. Blue Waters: Awesome food! No, Really!! A bit heavy on pocket. Quantity is more than enough for one person. When you have it, you’ll know where the extra money went.

11. Dollops: One of the oldest and most popular ones, try getting a table during dinner time an you will know what a full business means! Tasty food, used to be way too easy on pocket, not anymore. But the food is still yummy as ever!

18. Northy Mess: Feels close to home cooked food. Don’t forget to have chaas or lassi after the meal 🙂

21. Big Boss, now known as Zero Degrees: From noodles to rice, I think every thing RockS!

24. Sizzler Ranch is amazing! Sizzler Lovers, you got to be there.

25. Iceland had stopped making Maggi n sandwiches, so its only fresh juice, and it still rocks!

About the Author: the article is taken from a comment by a guest, Shri,  on our article Top Ten Food Where and What: Must Have at Manipal!