The purpose of this post is about the situation about the treatment of animals on campus by the campus guards. Recently, there have been an increasing number of instances where harmless dogs have stones pelted at them by guards on campus. The dogs were not disturbing the guards or any students. The dogs were not making noise or causing any kind of disturbance. The dog was just walking by. I am not sure if they do it on their will or if they have been ordered to do so by the college authorities. Nevertheless, both reasons are extremely disturbing, the latter even more so. 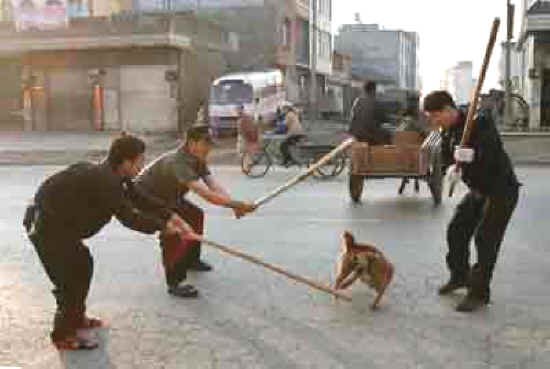 I was recently told by a guard outside 8th block that I was “not allowed” to pat a dog. She also threw stones at 3 other dogs approaching my way. Today, while walking past KC, a guard simply started picking up stones to throw at a dog walking on the pavement on the other side of the road. She was in no way harming or disturbing the by-passers.

I do not understand the point of throwing stones at a completely harmless being. Incidents like this have happened many times before as well. The act, I believe is not compassionate and inhuman. The reason I am writing this post is to reach out to the students to act when they see an incident like this. It is only for the students who care and want to take a stand against such barbarism. If you do not agree to it then please ignore this post.

I do not believe that any being, be it a dog or a cow deserves to treated in this way. And about the argument that this is a rule given by the college authorities and that the guards are helpless, I believe that it is your personal choice if you want you throw stones at a dog or not. Not every guard throws stones (I hope). In my four years in this college,

I have not heard of a single incident where a student is harmed by a dog or any other domestic animal. If an animal is a threat to the students, that particular animal can be dealt with. There is no need to throw stones at every other harmless creature.

In the end it is all about what your conscience tells you about what is right and what is wrong. So if anyone agrees that treating a harmless animal is wrong, then please do stand up for it and stop guards from throwing stones when you can. It is a request from a student to you fellow students. Lets start acting like educated passionate human beings instead of just claiming to be one.

About the Author: Manjira Das is a student of Manipal Institute of Technology, Manipal and is very passionate about animals.