India is at a cross-roads. The Government is paralysed and the opposition is in no better shape. Opportunists have taken to the streets in the name of Corruption in politics. It is at this time that we the people of India stand up for our rights and perform our civic duty with integrity.

In two years (some news media reports suggest that it may be in 6 months) every Indian citizen who is twenty-one years of age will have the opportunity of voting for the officials of his government. Casting a vote becomes an important weapon in the hands of the citizens of any democratic country. You have to experience it at least once to know the importance of an election. 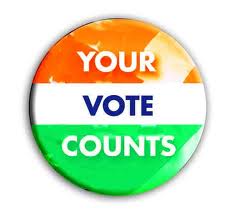 Yes, voting is a right. But with every right there is a corresponding duty. In this case, the duty is to know for whom or for what we are voting. Our duty is to be an intelligent voter.

For the average citizen this requires some time and effort during the months preceding election day. There are many issues and more candidates about whom we must familiarize ourselves. Much information can be gleaned from your newspapers and television channels. However, these sources are not always unbiased. We want more than a one-sided opinion. We want fact and truth. Only then will sound judgment be possible.

A not uncommon tendency is to let the weeks before election slip by without learning about the candidates or issues. This usually results either in not voting (giving up a democratic right) or voting for people whom we know nothing about (neglecting the duty which accompanies the right). Neither of these is laudable.

There is still time to become informed. But act now. If we fail to do so, we have no right to criticize our government in the future. We have no right to condemn an official. Failure to do this small amount for our city, state and national government shows that we are not really interested in their welfare.