Is it finally time to bid farewell to the incandescent light bulb?

A study carried out by the International Energy Agency (IEA) found that if everyone in the world adopted lighting systems that were more efficient, the world’s electricity needs would be reduced by almost 10%.

In addition, the switch would far outweigh any savings made on the emissions of carbon dioxide than the effect of adoption of solar and wind power combined. They also said that implementation of better building regulations would play a big part in encouraging the adoption of more efficient lighting by developers and homeowners.

Lighting needs account for an average of 19% of the world’s electricity generated – a figure that is equivalent to the amount of electricity produced from natural gas and more than what nuclear or hydro-electric stations are producing.

This is where the saving on carbon dioxide emissions comes in: the emissions resulting from electricity production to meet these lighting requirements is a whopping 70% of the emissions from motor vehicles worldwide and 3 times that of planes.

It is almost unheard of for an invention to last more than a century without having major modifications done to it. However, the incandescent bulb is still the world’s most used lighting system – accounting for nearly half of lighting in homes – 125 years after its invention. 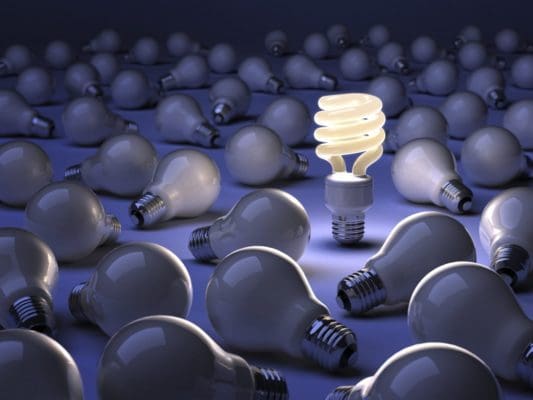 As far as inefficiency goes however, the incandescent bulb carries the day, being able to convert only 5% of the energy fed into light. Fluorescent bulbs are the largest consumers, taking up 43% of all lighting energy in commercial office spaces and non-residential buildings where the lighting system holds sway.

The tubes vary in efficiency, from 15% to as much as 60% and their application largely controlled by compliance with legislation and regulation. The lighting needs of various non-residential building are subject to health and safety regulations prescribed by each country’s government.

Of all the systems of lighting however, the IEA’s least favorite option is the halogen uplighter, largely applied in middle-class lounges in the West. It is the least efficient in energy consumption, they report, and it emits a lot of heat into the spaces lit, requiring possible air conditioning to reverse the effect – and that requires even more energy. Lighting systems have now progressed a lot and firms like Apollo can help you identify the best source of lighting for your needs.

However, even far from saving electricity, the energy body held significant concern for many areas around the world that had no access to electricity in the first place, forcing them to burn different fuels for light – a method that is inefficient, expensive, and unsustainable and a trigger for various respiratory ailments.

What to do then?

Energy efficient lighting systems are so obviously a bright idea (pun intended) that it is virtually impossible to justify any reticence toward implementing the necessary upgrades from users of less efficient systems.

The organization requested that governments be proactive in setting up policies that will encourage adoption of energy saving technologies, including setting aside funds to enable the switch.

But the journey does not stop there.

Every opportunity for reducing CO2 emissions should be explored. Sometimes, less obvious options are also open to us. In the UK, in addition to the big 6 Energy firms, there many smaller energy firm that tend to have a fresher perspective on such matters. These smaller firms include Ecotricity, Utility Warehouse, Flow Energy, and Good Energy. A few minutes checking them out on Review Sites or on Google and see if by switching to the smaller firms, you could save some money and support a common cause. For example, we checked out the Telegraph for a current Utility Warehouse Review and the Utility Warehouse Complaints process to get a feel for how these service compares to the bigger firms and were pleasantly surprised. There is an abundance of reviews for all these smaller firms and their position on CO2 emission and energy saving.