With Indian television taking a new road these days, running away from same age-old stories and drama and trying to focus more on social issues, a daily soap with such known story line, ‘Balika vadhu‘, broadcasted on ‘Colors’  is seen to be at the peak of its graph. It’s one of  the   situations where nobody wants to change the channel and is curious about the next episode, which was seen last when Dadi sa (Surekha Siri) locked up young Anandi (Avika Gor) inside the store-room and for the next 96 hours it was mayhem for the entire audience across the world who were following the series. 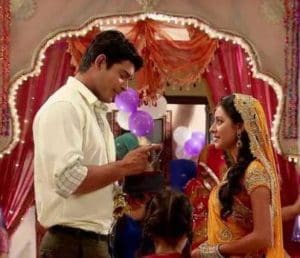 A similar situation is happening today when Anandi (Pratyusha Banerjee), who is now the sarpanch , met the new collector of the area, Shivraj Alok Shekhar (Siddharth Shukla), better known as Shiv to the audience, who fell in love with Anandi but did not realize it till the time Dadi sa started giving him indirect indications that he should marry Anandi.

Anandi was a victim of child marriage and was married to Jagiya  who left her after many years for another girl he fell in love with. Dadi sa, along with his parents disowned Jagiya as their son following this incident.

As Dadi sa saw that Shiv is an eligible bachelor, she began convincing Anandi to marry him and  after a long time she relented and agreed to marry again. Simultaneously,

Jagiya  realises his error and decides to return home to Anandi and his family. He reaches home uninformed just to see that Anandi and Shiv’s ring ceremony is being celebrated with whole village being invited to the grand ceremony.

Now let’s see what new twist comes in this roller-coaster ride of Anandi’s and Shiv’s life. Will the return of Jagiya affect their ongoing happy lives or will he taste the ground when Anandi rejects him straight away and marries Shiv to settle once again?
About Manas Kinra 13 Articles
“Yesterday I was clever, so I wanted to change the world. Today I am wise, so I am changing myself.” - Rumi