Ring any bells?? Yeah the same one, that was featured in Yahoo India travel! This one’s for you who love exploring places and of course the photographers (wink). And being a Manipalite you do search for salvation… So let the fun begin!

And something appealing happened on one of those boring afternoons, my friend disclosed her sweet yet adventurous story of visiting this heaven on earth like place! And then as usual the spree started! Let’s break the ice (pun intended).

Finally 2nd September came crawling! awww! We are going to Dudh Sagar falls! Yipee! But wait a second, before I unfold the adventures! A bit history ka dose to banta hai! After all history is mystery!

So as it was told in olden times (am definitely not from one 😉 ) a beautiful princess used to enjoy the natural “spa treatment” on that particular fall always, followed by “beta drink milk everyday thing, makes u strong” ! And of course where there is Eve, there will be an Adam! So obviously the prince did a peek-a-boo! So, our beautiful princess spilled the milk all over the water to form an improvised curtain! So there comes the name! A tribute to princess virtue n modesty! Presenting to you people! ” The Dudh Sagar falls”!

(And history lovers, for further details do Google the story)

So how do you reach this place! If you ask me! What we (three of us) did was, took a  train – Netravati express from Udupi at 1.00 am to Margoa! Did I just Margoa! Yeah I know by now some of you have been already dreaming of Goan beaches 😉 well that depends on your schedule! If you are on a two-day trip then it’s definitely a STOP! After all it’s Goa! But then if it’s only a day! as in only a Sunday! For that matter! Take this train! You will reach early morning around 6 or something…Freshen up! Eat at least something! Oh yeah before I take you on this journey! Make sure you pack your bag with some snacks! Cos the target destination has no such facilities! Yeah where was I, yeah so then next train that we took was” Amaravati express from Madgaon to Kulem! Well that was where the “locha” happened!

We booked it till Kulem! got down in the station! Hurray! we reached! And as confident as ever walked out of the station, just like that! Then there was the entry of this (then-funny looking person) man! So, we just bombarded him with our big question! Boss!! How do we reach the falls! He just looked at us for a sec! And then he was like go catch that train! And that train!! A little pause!  was our very own Amaravati express! Suddenly we realized oh the one we got down from! Whaaaaaaaaat! Flight or freight!

We are the brave ones (chuckling) So run guys! Awwww! What we see the train! It was still on the station waiting for us! We were lucky! ha ha! So after a bit of hesitation and inquiry we boarded the train! So what if we were in the A/C  coach! It was just one station away! Ended the discussion and entered who! the T.T.! ohhh beforeImove on! The train was still on the station! And T.T. sahab ab thodi ladkiyon se for that matter such short distance fine thodi lenge! But this man! OMG! He was like just GET DOWN!! NOWWWW! So we had to! Discussing and cursing him we stood there for a while! And then a little pause!

Before we could realize we heard the same hoarse voice shouting at us! Get on the train! Why the hell are you wasting time! We were like: what on the earth was that! Mind it train is still stationaryt han! So again we climbed the train, but this time sleeper coach han! After all we all learn from experience (wink). So of course the next T.T. did show up! And we had to pay fine! And why fine! We dint have reservation, not even the general ticket! And it seems if you travel on the same train you can reserve up to the next station called Sonalium! 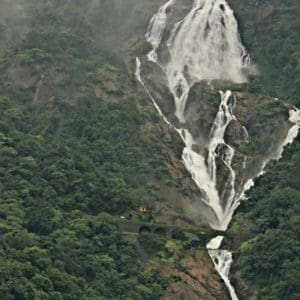 So finally we reached our target destination! And trust me after all these hours of traveling, paying fine and night out! It all seems absolute nothing in front of the beautiful falls! Oh yeah you definitely get to enjoy the picture perfect landscape  from the train itself! So it was just like, beta yeh to trailer tha! Picture abhi bakki hai mere dost!

And yup the station! It definitely has a name! Dudh Sagar station! But technically speaking the train just stops for two minutes or even less than that! We literally had to jump off on the tracks! Oh han han! Important thing! Carry an umbrella! And photographers! You know what precautions you want to take!

Then we just walked in the opposite way! The path, errr! rather the tracks are just lovely, watch out for you know what! But nothing else matters when you look at the spectacular view! It’s beyond the pain, beyond everything! Clouds, greenery, mountains! Wow! I just loved it! And obviously inhabited by our ancestors! Yeah! The monkeys! There were sooo manyyyy! But over all a 11 out of 10 view! So we walked, clicked and embraced the beautiful Konkan through our naked eyes! So then began the adventure! Whatttt! The tunnel! Wow! So excited, thrilled and deeply shaken by the darkness…. we paced in… deep inside, we heard some sound! Ahhh! The train was coming! Trust me u will love this tunnel! Entrance has these droplets of water running down, and then filled with darkness…to add into the fun! Train passed through it!

I can’t describe how it was! But it was so good! And those of you have watched ali baba chalis chor will remember that” khul ja sim sim” cave 😉 Oh yeah! a word of caution! Go in a group! And carry a torch! Why group! Cos the tourist place is also visited by some stupid hooligans! And torch! Of course to kill the blinding darkness! Then we emerged on the other side and after few minutes walk we heard the falls singing to our ears! “Tempo had reached critical level” And we reached the falls! So the walk to the falls is just about ten fifteen minutes!

The name definitely suits it! It is listed as India‘s 5th tallest fall measuring 310m.. Watch it for yourself! Words are not enough! Then admire, feel and click! There was this peculiar thing! The fall had a coat of mist around it! That’s what it looked like! But like I always say! Looks are deceptive! It was the water droplets! What else, then it was time to come back! So again we started out “walk”! When we approached the tunnel, what we saw! Oh god! Again those hooligans and this time it was some three or four groups!

Out of irritation i spotted a middle aged man! Asked him: Uncle are there more people like these coming in through the tunnel?? He was like naah you guys carry on! Later I realized that man was a part of some group! But then he was the good one! So we entered the”dragon” lolzzz Now what we did was, just ran as fast as we could! Tearing the darkness into bits and pieces… finally we grabbed some light! Hallelujah!

The next train was from Dudh Sagar itself!…Actually we boarded the train around 11, oh the train was Poorna express! Chuk chuk the train journey began! Surrounded by cute, wild, lovely and annoying kids! And it was almost seven we reached Udupi!

Words of wisdom(wink) : Hit the rod when it’s hot! Visit it in monsoons, carry an umbrella, a torch, snacks and definitely a camera! Worth capturing the “BEAUTY”

About Devasrita 7 Articles
Writing gives you the power to express. It speaks for the unconscious, for the conscious and for the subconscious! Somehow we are all slaves to our own thoughts! My soul speaks “Every Now And Then”, so if you have one! Then let it sink in! Of late i have realised that i love to write..now that i know this....I just let my thoughts flow....