On today’s date, as we enter the “KOTE” (Fort in Kannada), we tend to run into local men with loose shirts hanging down the tummy, hands tied at the back, eyes expectantly anticipating a unique reaction from us. Why? It is thankfully due to unemployment. These local men, would want to be your guide. And what would we do by habit is to scoff and shoo them away saying, we have Wikipedia in hands and we do not want people to loot us.

This is worth pondering over. DONT shoo them way. This occupation can be their bread and butter. We will neither empty our pot nor lose a battle of quiz, but definitely will make a home happy. Take time to think you are talking a new friend along and gifting him something. He will talk non stop. Narrating tales of what he heard from ancestors, what he saw, his growing up amongst these forts, the kind of visitors he sees. He can be a best guide and a company to walk with you and your photographer too. 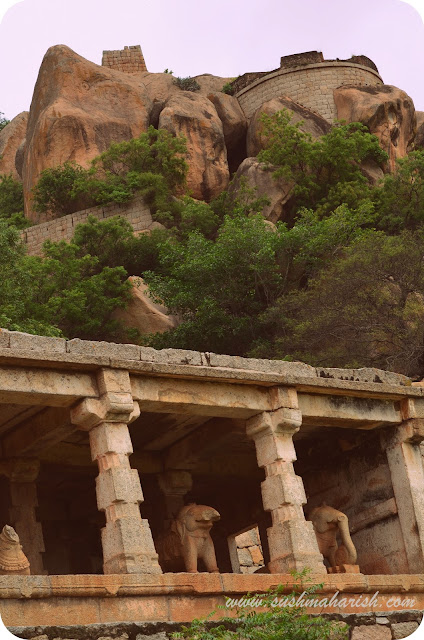 Being my first visit, I entered the cave with my head swirling 180 degrees without my consent. Not sure which view to stick to, there were broken boulders, parts of the hills, old huge trees. Most of all, the sweet meek squeaks attracted me. Every other hollow in the fort, stone foundation was one of them.  They can be the cutest pets in the world. The squirrels are believed to be Blessed by Lord Rama.

The legend says, when Lord Rama was in the process of building the bridge to cross the Indian Ocean to fight back Sita from Sri Lanka who was kidnapped by Lord Ravan, it is believed that hundred of these squirrels became the crusaders and brought in little pebbles joining tiny hands on the job.  we may enjoy terming it mythology but we also enjoy the discovery channel where elephant saves  a lion cub or a some pet that saves a drowning human baby. Am I correct?

How much ever we dread history lessons, we sure remember few names of freedom fighters, who fought against the british in the times that they ruled us. Or those names that safeguarded their territory in the times of kings and queens from their enemies. Now one of them is the brave lady called Obavva.
She was the wife of the security guard who guarded the seven hill stranded fort. When Hyder Ali another name from History books we tried to remember, attempted to attack the fort during reign of Madakari Nayaka with his soldiers, using a secret tunnel , it was Obavva who sensed human movement from within secret boulder gaps. She simply tucked her Saree up , took her weapon, Onake (pestle), and treacherously butchered head of every cunning soldier that crawled in from the tunnel.
We were brought up singing some patriotic songs that mentioned her, we were brought up giving speeches in schools on independence day talking about few brave hearts like Onake Obavva. She was worshipped as inspirational figure.

My guide, whom I hired at the entrance was a vibrant happy man. He talked non stop in his local accented Kannada. Most times neither of us communicated well. We nodded heads in a influencing notion saying I don’t know what you say but it’s ok. let’s go ahead please. I wanted to cry with joy in the helm of the charity I had done by hiring this puppet. I hardly followed the stories in full. Few details in bits.

He sure was cute when he explained the big oil-churning cauldrons used in the past, with his full gestures. Or the strong soldiers and how they marched. his expressions and gestures were full of life. Much better than a few lousy heroes of our Kannada movies.

Walking past several layers of fort that was generally flat ground and not hilly except for few spots, we come across numerous monuments with tales around them.  The two ponds “Akka Tangi Honda” named after wives of the king who committed self-immolation after Ali’s conquering the Fort. Imagine an underground Treasury that’s stone layered. The Swiss Bank of the royal families.

Few top hill breathtaking over views especially with the serene temple remains of the times reminded me of how the Bollywood crafted visuals of temples on top of the hills surrounded by boulders.

Apart from the numerous chipmunks, quite a few owls relaxed in the cool stone chambers and the monkeys loitered all around trolling very visitor and the kind of food they carried. They recognize nuts better.

History revisited. We also tend to remember with vengeance why our history teacher glorified Chacha and baba while there was so much to enrich us with. Chitradurga and Onake Obavva are motivation. We can skip few TedX sessions once we learn about this place and her.

Err, excuse me, is it just me or anybody is actually hooked on to such tourist spots for long hours, basking in the grandeur of the stones , imagining the stories of the past. The stone splendor keeps me hooked on for ever. Just missed kissing one of the chipmunks. They are too fast for me. 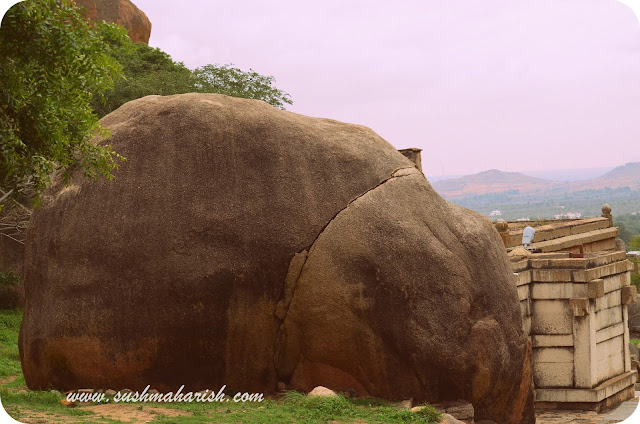 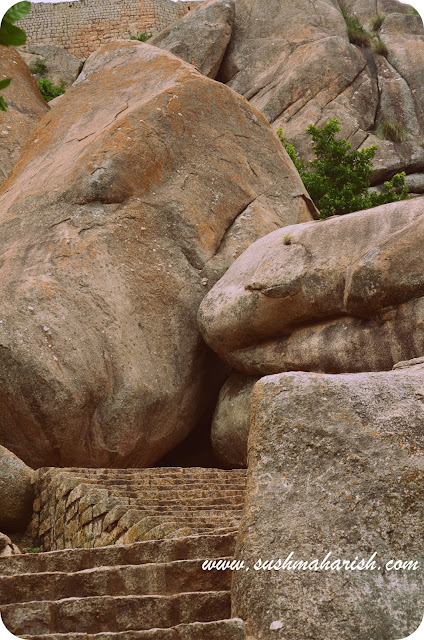 2) Beware of the monkeys. All they want is food.

4) There exists a small canteen that serves beverages, water, snacks and “chai” too.

5) Rock climbing can be disastrous. Security personnel are less. Our safety is our responsibility.