You are one of the few students who actually care about online classes. The teacher asks a question,  you unmute yourself to answer it. The teacher hears you start. And the familiar beep sound hits your ears through the headphones. The call has dropped due to a poor network connection. Thinking it’s going to be hard to explain that your internet connection is complete crap, you wait for it to come back, by the time it’s back, the class is over.

To blow off some of the frustration, you fire up an online game after calling your friends. Midway through the game, you lose connection again. You see your friends are angry at you because they lost the game because of you, thus turning a fun game meant to blow stress into something stressful. You are angry now. You try to reach out to the customer care of your internet service provider, but being an introvert, you prefer to chat with a customer service representative instead of calling them. After waiting 1 hour in the virtual queue, you finally connect, but after the first few messages… You guessed it, you lose connection again.

Might not be relatable for you, but for many people across the subcontinent, this is the case. We are becoming extremely dependent on the internet, more so now than ever. As the pandemic is making physical interactions tougher, we are all doubling back to digital mediums.

Without having a choice, people who weren’t familiar with the internet before this are forced to use it as their preferred mode of connecting with people. And for everything that is done on the internet, data is needed. Data, the bits, and bytes that rules over our lives at every point now. The same data which used to cost more than Rs 200 for 1 GB but after the addition of Jio in the Indian market costs less than Rs 10 for each GB.

Things have certainly changed a lot over the past few years with regards to data and data consumption by Indians, largely due to Mukesh Ambani’s Jio coming into the market and challenging its competitors to an extent where the entire Telecom industry became destabilized, pushing other companies in the market to the brink of extinction and making the market a closed oligopoly while Reliance is targeting to reach the monopoly status.

But in this current generation of Wireless connection and the massive size of everything available online, the mobile data itself cannot cut it. That’s when broadband comes into play.

Broadbands allow people to connect to the internet through an Internet Service Provider offering huge amounts of data for a fraction of the cost of mobile data. While portability is compromised, the huge data cap and the massive speed compensates for it. BSNL was a key player in the market before being taken over by multiple ISPs that are spread all around the country.

Alliance, Hathaway, Excitel, GTPL, ACT Fibernet, etc have been some of the key players in the market. They offer almost unlimited data in many cities within a reasonable pricing range. But one thing that all the subscribers have suffered overtime at the hands of these ISPs is the horrible service. All these companies provide their service through the Local Cable Operators (LCO) in the different regions, so the customer experience becomes directly proportional to the kind of LCO they have in their area.

While people with good LCOs seldom face problems, people with not so good LCOs in their region have to face a plethora of issues that a consumer should not face.

So is there a solution to this? Partially, yes! Instead of giving the job to LCOs, if huge conglomerates open their own stations in order to provide service, it would remove the need for a third party. And that, in turn, would mean that a lot of unnecessary processes could be skipped by the consumer to lodge their grievances if any, and also the company would find it easier to solve the issues, though undoubtedly it would be a lot costlier than giving the job to a third party. That is what Jio planned as it entered the Broadband Market as well. Airtel which was faring decently during all this time suddenly faced competition whose likes haven’t been seen before.

As it is not a hidden fact that Jio is looking to hit the sweet spot in every department it sets foot on in order to create a monopoly, the broadband war is on! The data consumption in India is massive, with almost every urban “middle class” family having access to a computer and multiple streaming services. The gaming market is steadily growing throughout the subcontinent as well.

To keep things short, it is a lucrative market where a lot of money could be made and there is no way the giants are going to leave the market untapped. Jio much like its entry into the mobile market has introduced plans that are way cheaper than all the alternatives available in the market with the promise of good service and great speed. On top of that truly unlimited plans are being offered. And as a cherry on the cake, the costlier plans come bundled up with a host of great OTT services, that will save the consumer a lot of money if they pay for these subscriptions anyway. 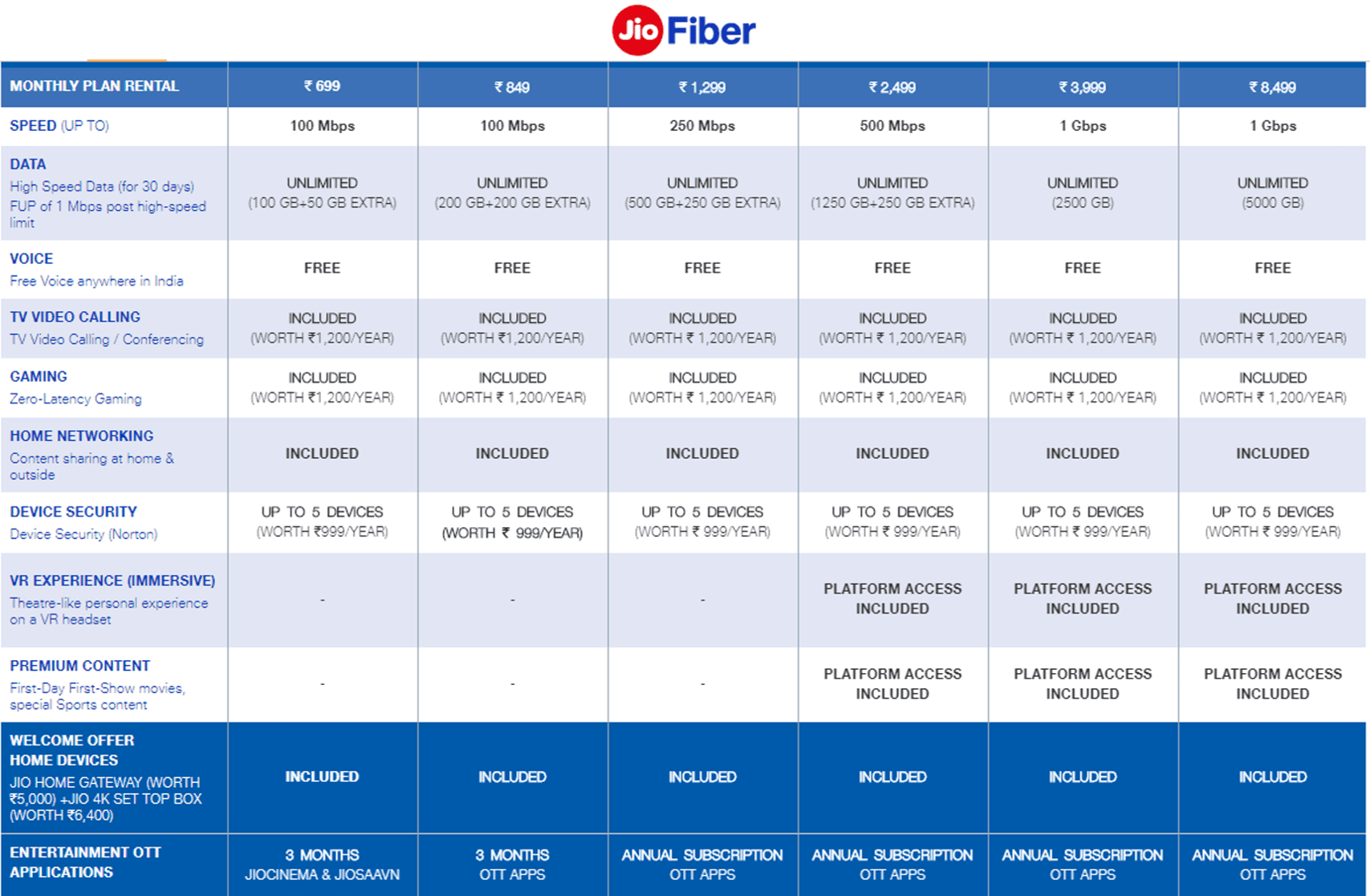 Airtel, in order to counter Jio’s sudden intrusion in the market, launched their new set of broadband plans under Airtel XStream that is very close to what Jio is offering, a repeat of what we saw in the early 2017s when Jio was a new entrant in the telecom market. While the plans of Jio look better on paper, Airtel boasts of great service and the option of their existing broadband users to upgrade to the XStream plans without the hassle of getting a completely new connection.

The Airtel Xstream bundle plans are —

The first two bundles in the list above include the Airtel Xstream Android 4K TV Box with 550 TV channels, 10,000+ movies, shows, and original series from 7 OTT apps and 5 Studios. The rest three include an additional subscription to Disney+ Hotstar, Amazon Prime Video, and ZEE5.

Both the companies using Fibre optic connections have to provide Unlimited (3 Terabytes per month) high-speed internet to the consumers been in a long drawn price war in the telecom sector. The founder of Airtel even said a few weeks ago on how horrible the pricing is currently in the telecom sector and has hinted that an approx 10x increase in the price of data would be a lot more feasible to the companies in order to not run at a loss.

But regardless of how the pricing war in the broadband sector goes, one thing that is for sure is that consumers will end up as the absolute winners in the case at least for the time being. The issues with having a monopoly is not a common phenomenon that has been experienced in India and even though the speculations doesn’t point towards anything positive, only assumptions can be made.

What can certainly be hoped is that the fresh blood being pumped into the Broadband industry helps a lot of consumers grow and fixes the issue people face with other ISPs, which ultimately leads to a cleaner sector instead of the congested and horribly maintained one that we see today.

About Hrishit Roy 44 Articles
Mass Communication student at Manipal Institute of Communication who believes in following passion over anything else. Heavily active in political discussions but not a supporter of any particular ideology in the entire spectrum, whatever benefits the people and the country is the way to go! Avid Traveler in Manipal with friends, a complete introvert at home.