Ronnie Screwvala’s entrepreneurial journey is an inspiration, to say the least. Founder of one of India’s largest media & entertainment conglomerates, Ronnie Screwvala has penned a book on his journey, from Cable TV to toothbrushes manufacturing and from Theatre to Media and Entertainment, Dream with your Eyes Open, which aims to champion entrepreneurship in the country. Bollywood’s latest entry to the superstar brigade, Ranbir Kapoor, unveiled the cover of Screwvala’s book at the event held in the city today. “Ronnie is an inspiration for everyone who dare to make their dreams come true. His conviction in an out-of-the-box film like Barfi made me realize that when belief meets innovation, it creates magic! I am delighted to launch the cover of his book and look forward to its release. I will definitely be buying the first day, first copy”, said Ranbir Kapoor at the event.

Speaking about this book, Ronnie Screwvala said, “Dream With Your Eyes Open shares failures and triumphs, thoughts and anecdotes of my journey. It details out my vast experiences and myriad lessons learned from more than two decades of building some successful (and some not-so-successful) businesses.

This book is about ‘it can be done’, not ‘I did it’. It’s all possible. Just dream your own dream—and when you do, dream with your eyes open”.

At the event, Ronnie Screwvala also announced that the commencement of the online bookings for Dream With Your Eyes Open, with the book slated to hit the stands on 2nd April 2015. 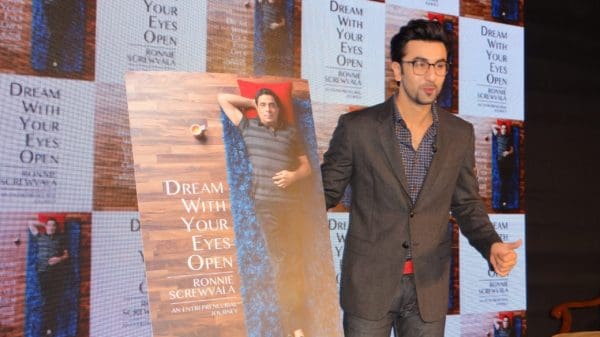 Demonstrating an innate ability to merge creativity with commerce, Ronnie Screwvala has been termed Jack Warner of India by Newsweek, Esquire rated him one of the 75 most influential people of the 21st Century and Fortune as Asia’s 25 most powerful. He is credited with pioneering Cable TV in India, building one of the largest toothbrush manufacturing operations – before founding UTV, a media and entertainment conglomerate spanning Television, Digital, Mobile, Broadcasting, Games and Motion Pictures, which he divested to The Walt Disney Company in 2012. Onto his second innings, Ronnie is driven by his interest in championing Entrepreneurship in India, and is focused on building his next set of ground up businesses in high growth and impact sectors. His more recent commitment to being a first mover in Sports has made him lend his support to Kabaddi and Football. He is passionate about social welfare and with his wife Zarina and through their Swades Foundation has given single-minded focus to empowering one million lives in rural India every 5-6 years through a unique 360-degree model.

You can pre-order this book from Flipkart at a special price – Click this link.