January 1, 2013, is almost here and we all know what that means. People will be making all kinds of resolutions – to lose weight, stop smoking, stick to budget, save money, find a better job, be more patient, be more organised, exercise more, eat better etc.

New Year‘s resolutions have been with us for thousands of years, ever since the Babylonians began celebrating the start of each new planting cycle. The Babylonians knew how to ring in the new year. They would party for days, with each day devoted to a theme before packing up their hats and pulling out their plows.

Even the king got involved. The festive folk would symbolically strip the king of his robes and send him away for several days – just to make sure no authorities were around to dampen the party atmosphere.

The Babylonians were the first to have New Year‘s resolutions. The most common promises were to return borrowed farm equipment and pay off old debts.

I am all for New Year‘s resolutions. In fact, I seem to like them so much that I make them all the time, even without waiting for January 1. I make so many resolutions that my one New Years‘ resolution this year might be to make fewer resolutions. But do I keep these resolutions? And what about you? Do you keep your resolutions? 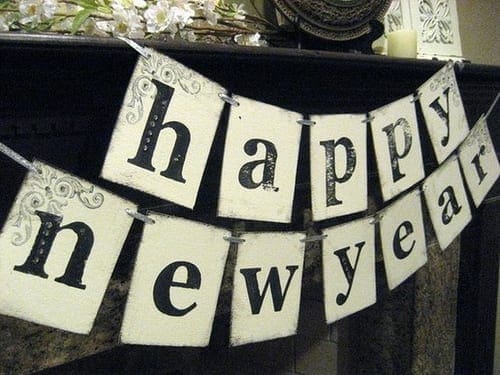 A study at the University of Washington found some interesting answers. Among people in their study group, 67 per cent made at least three resolutions for the coming New Year, and 63 per cent of them stuck with their No.1 resolution for at least two months. About two out of every five people make and keep a resolution. Conclusion: some people make New Year‘s commitments and turn them into action.

If the Roman god Janus were around today, he would have a thing or two to say about this. Enshrined in ancient mythology, he was the god of change, transitions and beginnings. The Romans named the first month of the year after him. Janus was often pictured with a set of keys, in keeping with his role as warden of gates. Shrines to him typically took the form of archways, gateways, and arcades.

As for his physical appearance, well, Janus had a face only a mother could love. That is because he had two faces – one looking forward, the other backward. This showed his ability to watch entrances and exits. Symbolically, it signalled the need to balance our hopes for tomorrow with a keen awareness of what happened yesterday.

I am sure you don’t have much need for Roman mythology. But it strikes me that Janus might know why so many resolutions are forgotten by February. Could it be that we are only looking forward – when we should be looking back in equal measure?

We have New Year‘s resolutions. What about Old Year reflections? Rashly made resolutions are usually the first to fall by the wayside. These are the folks most likely to fall off the resolution wagon within a few weeks of the New Year. In contrast, resolutions which stick are almost always backed by a strong personal commitment to change.

As we in this once beautiful country in every way look back at the year 2011, I am sure that you too must ask: What in the world is happening? The year 2012 could very well be already making history for us as a time of raging division, self-interest, suspicion, incivility, and violence. Surely we can do better. We must do better. There are a few action-oriented aspirations which are all about bringing back compassion, empathy, and civility and should form our New Year‘s resolutions.

For what it is worth, here is my list:

Finally, don’t wait – act now. Every day brings new opportunities to turn civility again into action. Forget about how we reached here. It has been long coming, but we refused to recognise it. It is not too late to get back to basics; Hold open a door for a woman. Greet a stranger. Check on an ailing neighbour. Take care of the orphan, the widow, the hungry. Respect the rule of law .and respect self. Go out-of-the-way to say thanks. Sincere appreciation is powerful stuff. Each act of kindness will brighten and create a better future for all of us.

Let these be our New Year‘s resolutions.