Didn’t you read the survey? A survey says cut out butter and risk cancer. What do you do?

We left a note for the milkman without delay. “No more skimmed. Back to ordinary milk, please.” We threw out all the low-fat spread and got out the butter dish again.

There was bacon and eggs in the pan on Sunday morning tried with lard, none of that harmful low-in polyunsaturated sunflower oil; we even gave the children fried potatoes for supper.

Thank goodness we realised, just in time, how unhealthy all that low-fat, cholesterol-free, food we’ve stuffed ourselves with really is. Now it’s back to good old bread and dripping. Hooray! Fat is good for us, after all.

It was inevitable that someone would eventually discover the lethal implications of the low-fat diet. Cut down on the butter and you run the risk of getting cancer, according to a survey in the British Medical Journal.

This is disastrous news for the millions of men who have been so nagged, bludgeoned and harried by their anxious partners that they would rather swallow cyanide than consume a high-fat sausage.

Now they are left contemplating the grim truth that all those years of self-denial have been in vain. Worse, they have been positively unhealthy. What now are they to make of their regular, comforting, executive health screen which has always reported their blood cholesterol level as “reassuringly low”? How can they get it “reassuringly high” again?

There is a commercial on the television at present where a revolting beer-swilling, crisp-munching bloke sits down to a plate of high-fat pie and chips in a determined attempt to induce an early heart attack. We are supposed to look upon him and his diet with loathing. We now see him, however, in a completely new light. He is the healthy man of tomorrow. Surely all our troubles can be simply solved by a nightly trip to the hamburger place? 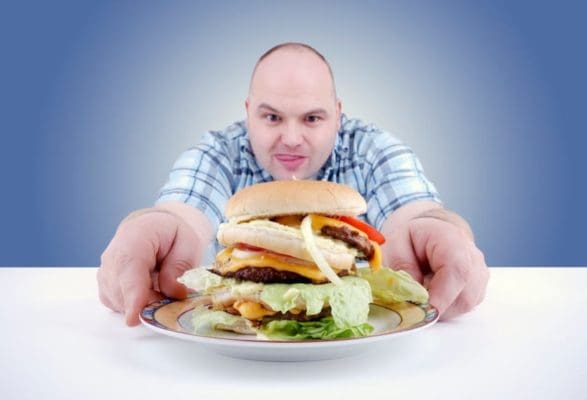 Unfortunately not. While the high-fat diet might stop you getting cancer, it is still more likely to increase your chances of dying from heart disease, according to all the publicity put out by the British Heart Foundation.

While a nightly bag of pork scratchings may help your cells defend themselves against cancerous change, it is still likely to accelerate the silting up of your arteries. It’s an attractive choice, isn’t it? Would you rather die from cancer or have a heart attack? It’s up to you to decide.

Well, is it? The illusion that we can decide whether to be healthy or not is one of the most curious phenomena of our modern age. This is the implication of the latest “cholesterol scare”.

Our health is a matter of choice in which we are literally consumers.

We can, it is implied, read all the improving literature put out and “choose” to be well or unhealthy according to what we decide to eat or drink. Choice of an “unhealthy” diet brings its own, unhappy punishment, which is untimely death (or at the least, an earlier death than those who wisely followed the “healthy” regime). We know best, the experts sagely tell us. Eat what we approve. If not, well, don’t blame us if, after all, your body lets you down.

Except, of course, the experts do not know best after all. The cholesterol findings should simply indicate that doctors have no idea what they are talking about. But we are strangely reluctant to admit this. We have become victims of the survey susceptibility which now dominates our ideas about health and disease. The more intelligent, sensible and provident we like to think we are, the more we interest ourselves in health surveys which newspapers obligingly print at the rate of one a week.

A survey indicates that women who eat chocolate biscuits are more likely to suffer from headaches? Sensibly, we immediately change to ginger nuts. A survey indicates that children should not be given salt? Promptly we stop them from eating a salty spread. A survey shows that men who drink water are likely to develop bunions? Well, there’s not much we can do about that one, but it’s useful to be warned in advance.

The survey susceptibility which now dominates our culture reflects our increasingly uncritical assumption that given the right scientific advice, we can prescribe for ourselves a regime that will guarantee us a long and healthy life.

This view sees doctors as engaged in a long, arduous process of advancing, step by step, to a point of certain knowledge where they will be able to tell us, finally and authoritatively, what we should eat in order to live to be a hundred. Until they get there, surveys are a useful diet guideline along the way. They are signposts on the medical road to certainty.

The more surveys the doctors carry out, the nearer we think we are to the ideal of the healthy life. The more surveys we read, the more we have the illusion that we are better informed about our health.

We eagerly devour each new one that comes along. Mackerel is good for you! Coffee is bad! We eat more mackerel and drink less coffee. We may even feel healthier too. But none of us dreams of wondering if we would feel just as healthy if we had eaten less mackerel and drunk more coffee.

There is another pernicious aspect to our survey susceptibility. This is the sense of self-righteousness it gives to those who feel they are using their intelligence to prolong a healthy life. Not only do we feel a marked superiority to those who just shovel food into their mouths without reflection; we feel that they are, somehow, to blame for the illnesses they are lining up for themselves in future. It used to be common to feel sympathy with those unfortunate enough to be struck down by illness, to see them as victims of mischance.

TODAY, we are encouraged to develop an attitude of outright censoriousness towards those who have the thoughtlessness to go and bring disease upon themselves.

It is unpleasant to imagine turning up at our doctor’s surgery with galloping hypertension only to be told: “Well, it’s your own fault for drinking coffee. Didn’t you read the survey?” Even worse to think we may be put at the back of his treatment queue be cause we brought our complaint on ourselves.

So, as a helpful reminder of what we should avoid, the following items of diet have been found to cause health problems in various surveys: tea, coffee, milk, water, orange juice, sugar, butter, margarine, bread, bran, bacon, salt, wine, beer, eggs, beef, pork, iamb, chicken, sausages, crisps, chocolate, etc. This is just a hasty, preliminary list; we can be confident that surveys will eventually find a health risk in all known comestibles.

Perhaps we should just try eating what we like. Perhaps our morning coffee will take 0.001 years off our life. But does it matter? Aren’t there more important things to worry about?