ONE rainy day in 1778, an eccentric Englishman called Jonas Hanway walked through a downpour in central London carrying the first umbrella. It quickly caught on and, within a short time, various superstitions arose about umbrellas: that they should never be opened in the house was one of them.

The matter of good and bad luck has been analysed for many years by many eminent scientists but no one has yet been able to decide whether either exists. Cynics, of course, say we make our own. For example, when someone once remarked to the father of Alan Jay Lerner, author of My Fair Lady: ‘Alan’s a very lucky guy,’ his father replied, ‘And it’s a funny thing. The harder he works, the luckier he gets.’

Surely, there must be some scientific explanation for the reason your lottery number only ever comes up the week you forget to buy a ticket, or that your door keys are always in your handbag except on the very day you forget to check your handbag before shutting the door.

Call it luck, fate or the Law according to Murphy, what can go wrong certainly has a tendency to do just that. And, whether there’s any basis to it at all, it would be rather a shame if Murphy’s Law should ever be disproved, robbing us of at least some semblance of an explanation for life’s many absurdities such as why the bus is always early when you are late and late when you are early, and why the telephone in the hall seems to be wired up to the bathroom shower, or why else would it ring as soon as you turn on the water.

Imagine, if they suddenly found a scientific reason for why it always rains immediately after you’ve cleaned the windows, washed the car or fired up the barbecue. They could well discover that it was the result of extra body heat generated from this activity rising into the atmosphere to form nimbi, born out by the fact that it always rains at weekends when most people wash the car or light a barbecue. Governments might then be forced to pass a law restricting these activities to certain days of the week, thereby putting forecasters out of a job, making the weather predictable and robbing British people of their most fertile topic of conversation.

Just imagine if it was discovered that anxiety transmitted electronic signals to traffic lights, causing them always to turn to red when we are in a hurry. Every motorist would be on Mogodon and the police would have to bring in a new law against driving under the influence of tranquilizers. And, what if the reason that we always found ourselves sitting next to the world’s most crashing bore at a dinner party or the world’s fattest person on a flight, was something to do with our body chemistry. We would be constantly under the doctor trying different medications to change our biological make-up and rid ourselves of those irritating people we attract, such as the ones who are always in the supermarket queue ahead of us writing out cheques for packets of toilet rolls. 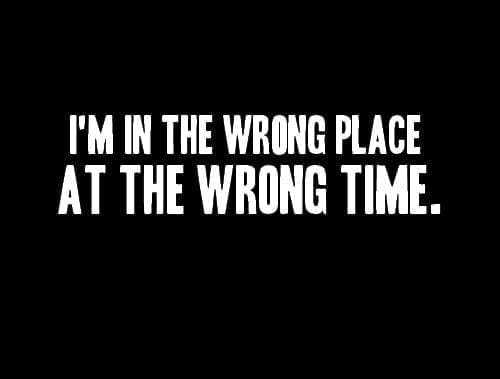 Of course, some people would prefer the inexplicable explained. I am sure that restaurateurs would love to know precisely the reason why, after hours of doing no trade at all, everyone suddenly comes in to eat at once. Or why it is that when they accidentally knock a glass over a customer’s clothes it nearly always contains red wine or coffee but hardly ever plain water?

Motorists might be a little more benign if they knew why vacant parking spaces appear, as if by magic, outside their own front doors – but only when they’ve given up looking for one and parked 10 blocks away.

It might also be less embarrassing for all concerned if we could do something about the hacking cough we always develop in the middle of a theatre production never in the smoke-filled bar during the interval – or the flatulence that bides its time until we are in the Quiet Please section of the public library.

Even I would love to know why my handbag only gets stolen when I’ve just been to the cash machine and there’s only ever a power cut when I’ve forgotten to save my work on the computer. I’ve written this twice.

To conclude with a short summary of ManipalBlog Law: