HOW I MET YOUR MOTHER, the world’s most watched television show, aired the first episode of its last season(eighth) on 24th of September, where it is quite expected that Ted Mosbey (Josh Radnor) will meet the mother of his children who are obviously bored now listening to their dad’s love story for past 7 years.

Season 7 ended with a very sweet and happy note where Ted was eloping with his ex-girlfried Victoria (Ashley Williams) after the lady sensation of the show Robin Scherbatsky (Cobie Smulders) convinced him that Victoria is the perfect girl for him.

It was a little disturbing for die-hard fans of Barney Stinson (Neil Patrick Harris) as he was seen getting married to Robin (as we infer from the episode, still not declared) after his fiancee Quinn Garvey (Becki Newton) dumped him on knowing the fact that he used to date Robin but never bothered to tell her. 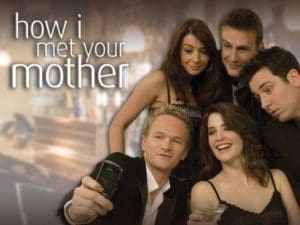 The story behind how Barney and Robin agreed to marry is yet to come and will be hilarious and very ironic as they are two people in the show who are always against marrying.

Season 8 began at the same point where season 7 had left. Ted was summoned by Robin(seen in bride’s dress) asking him how was Barney handling the pressure of getting married in a while. As expected Barney was filled with panic and disgust with the mere thought of settling with someone for rest of his life (typical Barney you know!).

At that moment Ted takes the viewers into a flashback telling why he didn’t marry Victoria, a plot which is too awesome (in the words of Barney) to be written and is better if you see it yourself.

On the other hand, Marshall (Jason Segel) and Lily (Alyson Hannigan) are shown busy taking care of their new born son Marvin and their whole world seems to be revolving around him now. Situation becomes even more hilarious when everyone around is talking to them and they are lost in their own insomniac tired world and are seen to be interpreting everything in their own way which is in total contrast with surroundings!

The episode ended by clarifying two things for sure that Ted’s “to be” wife plays bass for a band(which he always wanted) and has a yellow umbrella (the same umbrella which has been hiding her face for 7 years!).

Although the episode was a little disappointing on the part of storyline as viewers are now very curious to see who the lady is while the makers of the show are still planning on going slow but still its a must watch for big time fans of this “legen-wait for it-dary” series.