“The city of Bidjanagar is such that the pupil of the eye has never seen a place like it, and the ear of intelligence has never been informed that there existed anything to equal it in the world.”

Hampi is a small city located in Karnataka. The history of Hampi dates back to the prehistoric Neolithic age, and mythical mentions of Shiva Purana. Although different in their names, Shiva Purana referred to the name of the city as ‘Pampa Kshetra’ in the ‘Krutayug’ and ‘Kishkinda’ the kingdom of Vali & Sugreeva in the ‘Treta Yuga’. However, the modern name Hampi originated from the mythological name of Pampashetra, as the years passed, the name evolved from Pampashetra to Hampi due to language restrictions and the difference in pronunciations. 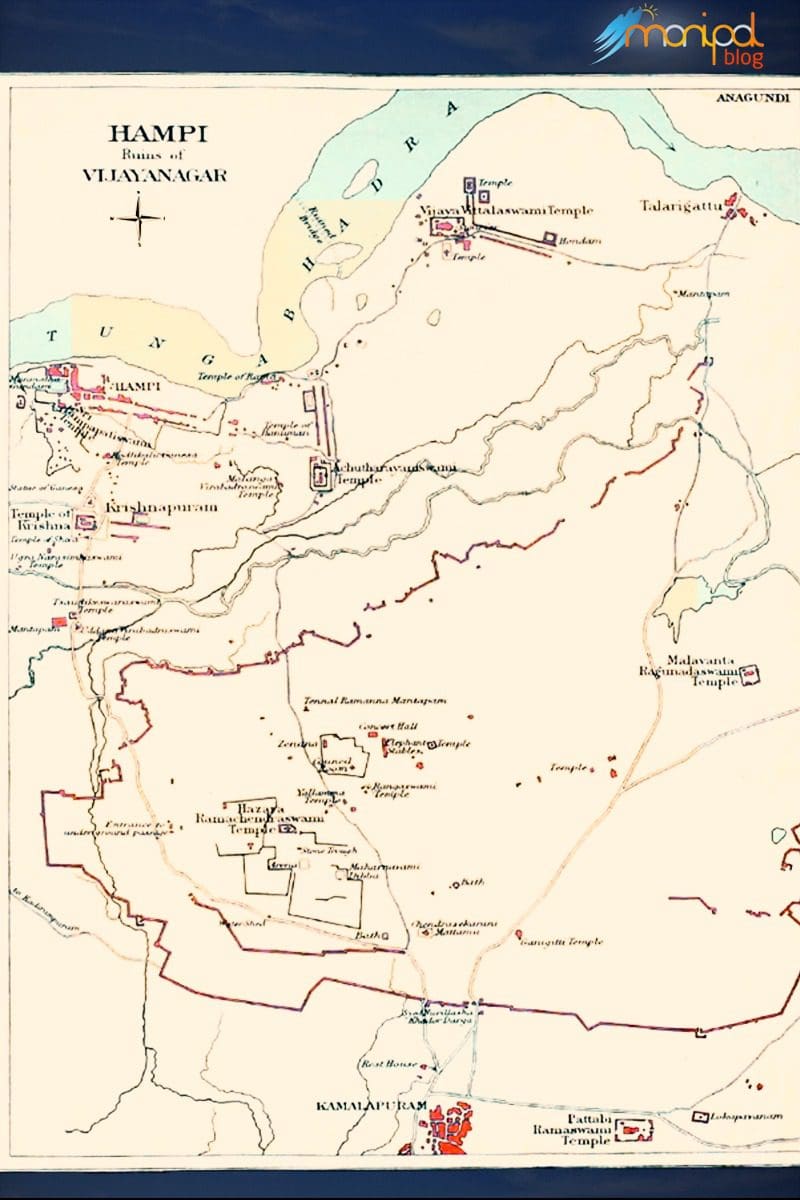 History states that Hampi, the imperial capital city of the mighty Vijayanagara empire was established by the ‘Sangama Brothers’ Harihara and Bukka. The city was initially named Vidyanagara, after a sage called Vidyaranya, the sage that united South India, to help establish a stronger hold for Hinduism. However, it was later renamed Vijayanagara which stood for ‘The City of Victory’.

Hampi was already a pilgrimage center with the oldest temple dating back to the 8th Century. The city provided the ideal location in terms of strategic positioning and spiritual importance and hence the brothers decided to establish the city here. This was just the start, between 1336- 1565 about 4 dynasties and over 20 rulers ruled over this amazing jewel.

The Rulers of the Vijayanagara Empire

One of the most prominent rulers for Hampi was Krishnadeva Raya, the ruler of Vijayanagara, the king most of us know about from the famous tales of ‘Tenali Raman’. Krishnadeva Raya was very intrigued by Arts architecture and literature, as he happened to be a Telugu scholar himself and had penned several Sanskrit and Telugu literary works. During his reign, Hampi reached its Golden Era.

Vijayanagara Empire had not only managed to get the entire South Indian Peninsula along with parts of SriLanka under them but also created a very safe environment for the traders, away from the invasions and attacks in the north. This is the major reason why trade flourished here and led it to become one of the richest and well-provided cities in the world. Traders came from all around the world to sell their products in different markets.

A very interesting fact to note here is that in the olden days, temples were the suburban centers. People would gather here and indulge in social activities like shopping, melas, etc.

There are 7 significant temples here, Virupaksha Temple, Krisha Temple, Vithala Temple, Achyutaraya Temple, Malyavanta Raghunatha Temple, Pattabhirama, and Hazara Rama Temple. Each temple was specialized in their own markets that sold different things like precious stones and gems, textiles, etc. in fact even with the change in dynasties, each ruler added to the work of the previous ruler and increased the architectural biodiversity of each temple complex.

The Virupaksha Vittala & Hazara Rama Temples of Hampi have carvings that depict the social lives of the people living there, their interactions, social events, and daily life. The carvings on these temples are one of the few shreds of evidence of the glorious life led by the people of Hampi.

However, no empire could stand the test of time, Vijayanagara was no different, after the death of Krishnadeva Raya, none of his successors reached the glory that Krishnadeva Raya had reached, however, it did not affect the trade.

The Downfall of Hampi

The downfall started gradually and the major crash happened when Ramaraya took the throne making the boy king Sadasiva Raya a puppet King. By this time around 1565, the 5 Sultans of Deccan made an alliance to defeat the Vijayanagara Empire. These were Bidar, Bijapur, Ahmednagar, Golconda, and Berar. Rama Raya ran into troubles with them due to the ownership of a fertile piece of land to the south of the delta of River Tungabhadra and River Krishna called the Raichur Doab. The 5 sultanates united against Ramaraya due to the atrocities reigned by him. They finally attacked in 1565. The battle took place 150 kilometers away from the city of Hampi in a place called Talikota. In the battle, Ramaraya was beheaded, after which the army of Vijayanagara had to retreat and accept its defeat. This was the first time in their 200 years of rule, Vijayanagar had been defeated in a battle.

One of the brothers of Ramaraya immediately returned and took the royal family to safety and left the entire city defenseless against any possible invasions or dacoits. The Sultans of the Deccan celebrated their victory for ten days before coming to the city to claim their victory. In the period of the 10 days, a lot had changed in Hampi.

The people knew that Hampi had lost the war and the royal family had fled, they had no choice but to leave the city as well. When the Sultanates came to the city it was already abandoned, having found nothing there, they plundered the city for 6 months continuously, which only made it worse for the city. The city which was once flourishing and full of promise was now reduced down to ashes and was no longer the great city it once was. Completely forgotten in time.

Years passed and in the 18th Century, Hampi saw the new light. When Captain Colin Mc Kenzie, an archeologist found the ruins of Hampi. He spent year after year trying to excavate and find out what had really befallen this city. The oldest map of Hampi was in fact charted by him in 1799 and the oldest picture of Hampi dates to 1856 by Alexander John Greenlaw.

The site was eventually listed under the UNESCO World Heritage site in 1986, however, it ended up in the danger list with only 14 monuments. Later extended to 56 now its 26 square km of land with almost 83 monuments, spread all over. There are several books that talk about Hampi today, however not a lot of them really cover what happened there.

If this article has truly piqued your curiosity, here are a couple of books we can suggest: Hampi Vijayanagara by John Fritz, Hampi- Story in stone, and Hampi: The forgotten empire: Robert Sewell.

Today Hampi is more like an open-air museum that attracts people from all over the world, not only historians and culture enthusiasts but also rock climbers, backpackers, trail lovers, and the entire spectrum. In the 1980’s Archaeologists, John Fritz & George Michelle spent 20 years in Hampi and said that even that was less for them to know everything about Hampi, so when do you want to start? 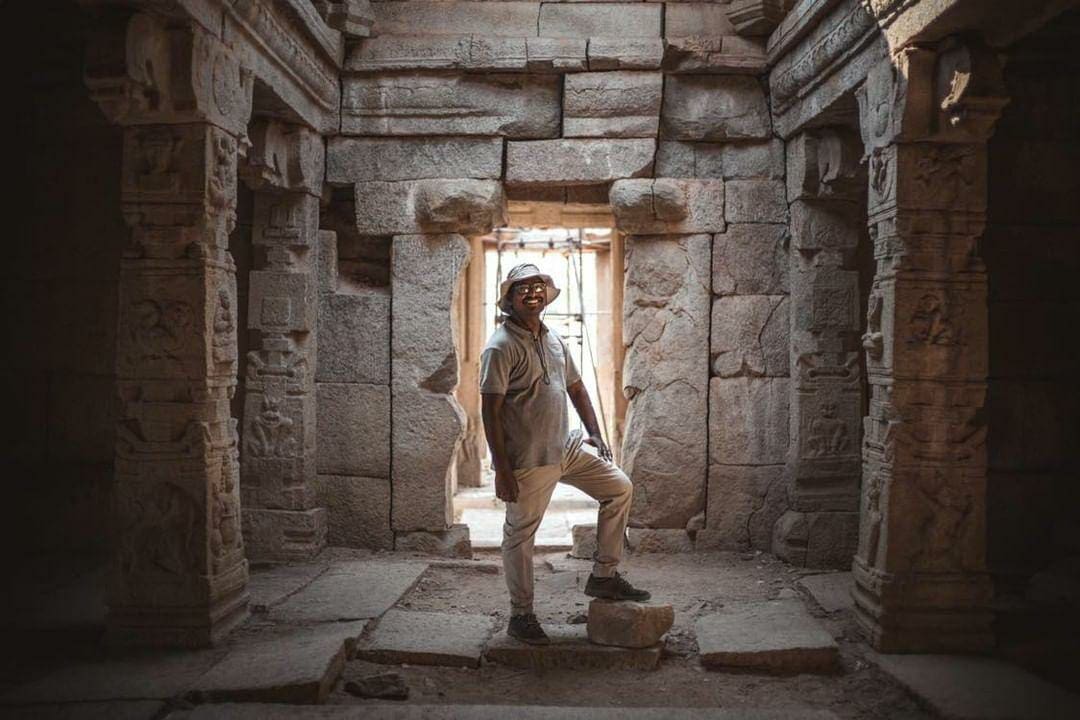 The information was taken from a local historian of Hampi, Mr. Santhosh. He is an engineer by education and a historian by occupation. He was born and brought up here. For him, since he was a child, he remembers cycling up to Hampi and spending his days in the ruins, running around, playing, and exploring the site.

About the Author – The Wilderness Live Established in 2020, are a freelancing content company writing in the field of travel, culture, food, and animals. We run a podcast on Spotify, Apple, and Google podcasts under the name of Wilderness Live and you check out more of our work on www.thewildernesslive.com.