“The Accidental Prime Minister: The Making and Unmaking of Manmohan Singh” by Sanjaya Baru is a book that has hogged the headlines in newsprint, on the internet, and on the television screens of India for the past fortnight.

Released at the time of a high-stakes and high-voltage General Election, the book has received widespread publicity, scrutiny and coverage. Some have called it a hatchet job on the beleaguered out-going Prime Minister Dr. Manmohan Singh, while others say it vindicates the strident criticism of a man derided as the hand-puppet of a dowager who can neither take the throne for herself nor can facilitate the accession of a heir who hasn’t attained the maturity to take on such a high office.

But, as it turns out, the book is neither of the two. 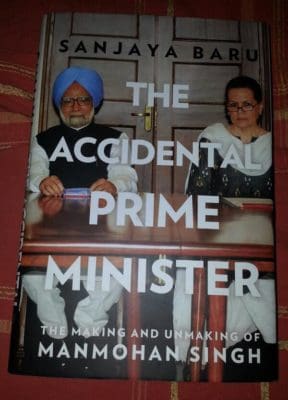 The book’s author, Sanjaya Baru, a senior financial journalist, has provided what is perhaps the first-ever insider’s account of the Indian Prime Miniter’s Office (PMO), where he served for four years as Dr. Singh’s Media Adviser during the first UPA Government.

One of the biggest misconceptions about the book is that it’s a tell-all account of the gradual decline of the PM’s stature in the eyes of the political class and the public, which it isn’t. The book is in fact a memoir of Baru’s and not a biography of Dr. Singh, which is yet another misconception about it.

As Baru states in his foreword, he was “a loyalist who wanted him (Dr. Singh) to succeed.” As the reader delves further into the book, Baru  is at pains to repeatedly emphasize that his motive is not to criticize, but rather defend his PM, who in his eyes has been wrongly vilified. He fears that Dr. Singh will suffer the ignominy of becoming a scape-goat like his predecessor Narasimha Rao; for, according to Baru the Congress Party values the Nehru-Gandhi family above all else. Perhaps he had foreseen the uncharacteristically aggressive reactions from Dr. Singh’s reticent family members who termed the book “nothing but a stab in the back…a huge betrayal of trust’’ and a “mischievous, unethical’’ exercise.

To be fair to Baru however, none of the so-called “controversial episodes” in this book were hitherto unknown to anyone possessing as much as a passing interest in Indian politics. There is hardly anything unethical about the book, save for the timing of its release; which, as admitted by Baru himself, was timed by the publishers for purely commercial reasons, given the curiosity generated by Election Season. This is perfectly understandable as the book would have been of purely academic interest had it been released afterwards. Nor is it hastily written to capitalize on this timing; as Baru claimed in an interview to senior journalist Madhu Trehan on Newslaundry that he had worked on it for a year.

Coming to the contents, Baru has stated that he wrote the book to primarily address four questions that he had been asked often during and after his time at the PMO, namely:

“Why had the PM’s image taken such a beating?”

“What was the nature of the relationship between Congress Party President Sonia Gandhi and Dr. Singh?”

“What do you think his legacy will be?”

Baru addresses these questions by taking a thematic approach in the book’s chapters, instead of using a chronological sequence of events. For example, Chapter 6, “Brand Manmohan” is focused mostly on his efforts to project an independent image of Manmohan Singh which largely failed due to the PM not wanting to anger the Nehru-Gandhi family; while Chapter 11, “Ending Nuclear Apartheid” largely focuses on the PM’s most enduring achievement, that is, successfully concluding the Nuclear Deal with then-US President George W Bush.

While this approach has its benefits due to simultaneous timelines of several episodes, the major drawback of having thematic chapters is the ensuing confusion for a reader not familiar with Indian politics, leading to repetitive passages establishing a background to the contents of the chapter, resulting in a tedious re-reading of several aspects of the book’s dramatis personae. However, Baru hasn’t compromised on the content, using crisp language to colour his anecdotes. Be it his tussles with the Congress’ intrigues and its sycophantic leaders like Mani Shankar Aiyar; or the occasional usage of the BJP’s eternal Prime Minister-in-waiting, LK Advani as a comic relief; or even the absurd episode of senior bureaucrats jockeying for cabin allotments in South Block, the PMO’s residence, showing that petty office politics is prevalent even at the corridors of highest levels of administration. Even former PM Narasimha Rao makes a cameo appearance in the book’s pages. However, his self-admitted loyalism towards Dr. Singh hasn’t prevented him from calling a spade, a spade.

The Congress Party itself has been largely portrayed in an unsympathetic light. Senior leaders and Ministers, who were subordinates to Dr. Singh in title but seniors in political experience are shown as largely ignoring Dr. Singh’s authority; instead showing deference to Sonia Gandhi for having bestowed them their ministerships. Be it the ham-handed and hostile approach of the party towards Narasimha Rao’s family in the aftermath of his death, or the Prime Minister turning a blind eye towards corruption of others in his Government, and his tolerance of the party heaping praises on the Gandhi family for his achievements and foisting the blame on any failed policies, Baru hasn’t pulled any punches.

Baru candidly admits to having manipulated the news media on several occasions as a spin doctor for Manmohan Singh. This includes practices ranging from planting stories in the media as an “anonymous source”, to getting TV journalists to interview political opponents who were supportive of Dr. Singh’s policies like the Nuclear Deal to drum up public support. This is something that has been largely glossed over in the media storm that followed the book’s release, perhaps because of the media’s hypocrisy in its reluctance towards shining the unrelenting spotlight of criticism on itself. Most notable is the episode of the veiled threats of senior Congress leaders to throw the law-book at a senior Editor during the Cash-for-votes scandal at the time of the No Confidence vote during UPA 1.

However, one major grouse that readers may have with Baru is about the word “Unmaking” in the title. The book is almost entirely set during UPA 1, a time of several successes for Dr. Singh and when his reputation was largely unsullied, giving Baru space to mount an effective defense of Dr. Singh. As a result, many of the fiascos that fully emerged during UPA 2, like the 2G Scam, Coalgate, the Anna Hazare Movement and Rahul Gandhi’s infamous “This Ordinance Is Nonsense” episode don’t receive their due coverage.

Baru defends himself of not having dwelt on these matters in detail as he had left the PMO in 2008, depriving him of an insider’s point of view, again an understandable point. This has led to insinuations that Baru was reluctant to discuss things that shone an unflattering light on Dr. Singh, like his culpability in Coalgate. He does, however address them at the very end; proffering a pragmatic defense, terming these episodes acts of omission and not of commission on part of the Prime Minister. The major part of the book portrays Dr. Singh in a sympathetic light. He portrays Manmohan Singh as a shy, cultured and erudite personality who had earned the respect of the leadership of his allies, his immediate subordinates in the PMO, and that of world leaders. Baru propounds the theory that Manmohan Singh was chosen as PM by a party that had never led a coalition government before and was widely expected to fail. His unexpected success, Baru claims, led to his emasculation in UPA 2 to stifle any potential of Dr. Singh emerging as a parallel power-center in the Congress party. Baru concludes that his refusal to fight back to led to his loss of image.

It is only in the Epilogue “Manmohan’s Legacy” that Baru dwells on the subject of the “Unmaking Of Manmohan Singh”. He paints the portrait of a tragic hero, or to paraphrase the author himself, a modern-day Bhishma whose self-imposed morals and steadfast loyalty to the Congress’ first family cost him his reputation and respect in the eyes of the Indian public. He expresses his exasperation at Dr. Singh’s obstinacy in refusing to openly take any credit for himself, hinting at his deeply ingrained subservience towards the Nehru-Gandhi family.

If Baru’s intention was to arouse sympathy for a man who rose from humble beginnings in the hinterlands of modern-day Pakistan, who went on to earn degrees from some of the world’s most prestigious colleges, became an economist of repute and then revived the Indian Economy in the 1990’s amidst the embarrassing balance of payments crisis; but has instead become the butt of everyone’s jokes, then he has largely succeeded. However, its defense of his stewardship of India’s destiny from 2004-2014 is shaky at best.

The book is a one-time read, and I would suggest that you rather borrow it from someone who possesses it. Priced at INR 599, and at only 300-odd pages, the book is a tad bit expensive, considering its lack of  content, sensational or otherwise, to call for such a price tag. But the binding and paper quality are some of its redeeming factors and one cannot fault Penguin, the publishers for that. If you are a rabid hater of the Congress Party and Manmohan Singh, or if you are expecting something explosive from the sensationalized media reports based on excerpts, this book is not for you. Read it with an open mind devoid of unrealistic expectations and you won’t be disappointed.

About Vinayak Prabhu 19 Articles
Change cant be given to you everytime. You yourself must bring change. A Student at the Manipal Institute of Technology