I spoke in my hospital ward today after a long gap. I used to take weekly classes for my patients. I always enjoyed it. Today a patient, a master’s degree holder, sent me this flyer. It says “beer prevents cancer”. It talks of some UNNAMED flower which has this effect. Yes,this is where I, as a doctor have a role to play. Use as many words to tell clearly ALCOHOL HAS NO MEDICINAL VALUE. Earlier it was newspaper articles that said A PEG A DAY, KEEPS HEART ATTACKS AWAY or a TV advertisement which said “YELLA OK ,COOL DRINK YAAKE”. Now it is the social media and WhatsApp that is making innocent people, victims to false propaganda.

Many start drinking to fight anxiety, many start drinking to stop ASTHMA attacks, few to relieve depression. But remember many of them who read about celebrities living long, journalists talking of freedom to drink, become victims innocently. These stories make them start with SOCIAL DRINKING. But they won’t be fortunate enough to control themselves. Alcohol in small doses reduces fear, but the dose to control fear increases slowly.

Let us be more careful to talk about our own use of alcohol or our own views about alcohol, as unknowingly we may influence someone else. 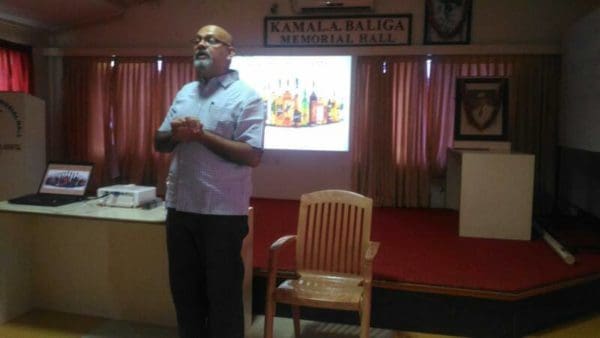 About the Author: Dr. P.V. Bhandary is a well-known Psychiatrist in Udupi and Medical Director at Dr. A.V.Baliga Memorial Hospital at Doddanagudde, Udupi. He was selected for CADABMA’S distinguished Psychiatrist Award 2012. This award is initiated for his outstanding services to the marginalized section of the society in the field of psychiatry. The award was presented to him at Bangalore in presence of His Excellency Dr. H.R Bharadwaj, Governor of Karnataka, His Excellency Dr. K Rosaiah, Governor of Tamil Nadu, and His Grace Dr. Bernard Moras, Archbishop of Bangalore and other dignitaries.