Born in South Africa, a young and scared Claire McFarlane moved to Australia. She soon grew to love the liberating atmosphere in Australia. Shortly after high school Claire decided to study Forensic Medicine. Overburdened with the academic stress of her course, Claire made up her mind to move away to Paris to pursue fine arts.

Being a self funded student, she worked part time at a bar. On the 18th of July 1999 at 3 am, after covering a double shift, she made her way to a taxi. On her way, she was intercepted by a man. What followed was an hour long of physical violence, strangulation and rape. After being beaten, stabbed by a knife and getting a taste of death, a naked and vulnerable Claire lay on the streets of a foreign land, trying to put together the torn pieces of her clothes. 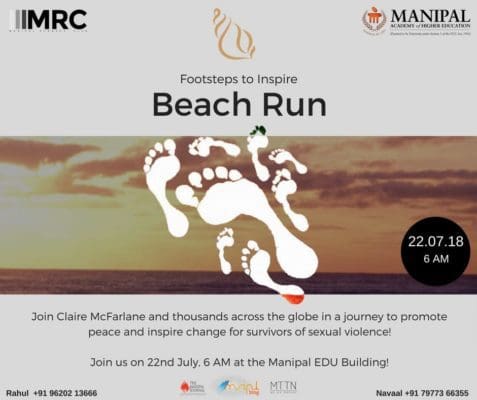 She decided to get herself to the hospital although that meant filing a complaint and battling the terrifying French legal system. Claire had heard horror stories about how awfully the French system dealt with rape cases. Nevertheless, being the determined soul that she was, she pursued. It was only after the attacker had reoffended and had the DNA samples match Claire’s case, that she was contacted. This was 10 years after the date of the incident. 10 years. It cost her over $40,000 to put her attacker behind bars. After serving a quarter of his sentence, the attacker was released on parole. Claire’s battle with the French legal system lasted over 16 years. Not once, did the legal system treat her with kindness and respect. Rather, she was made to feel as if everything was her fault.

Shook to core, Claire soon realized that there was a deeper meaning to her life. With a strong desire to create a global open dialogue about sexual violence, Claire started ‘Footsteps To Inspire’. On 18 July 2016 she began running 16km on beaches, one kilometer for every year of her struggle, in every country and dependency of the world: that’s 230 countries and over 3500 kilometers of beach. Through this initiative, she desires to tackle the difficult and often stigmatized issue of sexual violence. After embarking upon this journey, she noticed a trend. She realized that most people want to voice their opinion about the subject, but are clueless as to how to go about it. Through Footsteps To Inspire, she is creating that safe space for conversation and understanding.

Claire’s story is moving and heartwarming. It leaves us all with a strong desire to make a change in this dystopian society. On the 22nd of July, Claire is organizing the first Annual Footsteps To Inspire Global Run. The Manipal Runners Club along with the entire running community at Manipal will be joining this beautiful initiative, by conducting a run at the Hoode beach.

ManipalBlog invites everyone to join the run and together, let’s raise our voices and concerns about sexual violence. Mark the date! 22nd of July at 6 AM, Manipal EDU Building.