Yesterday, after the loud success of the MIT Revolution, there has been a mixture of emotions on display. The celebration of the success, the sorrow of a demise, the joy of bringing justice to Ishan Nihalani,  the lost emotions of a family, the mourning by friends, the rage of the wronged students, the hooligan insensitive behaviour by the ruffians, and many many more. Later last night on Facebook I saw lots of people debating over many issues, one of which set me thinking. Everyone have their own perspective and they raise to fight down the others. Within unity, i found diversity. Here’s one such issue…

One set of people felt that it wasn’t right to use a person’s death to trigger a change for the college, and yesterday should have been a peaceful day to mourn, lighting candles and remembering him. Yet another set of people believed the dead cannot be brought back to life, but the situation can be used to do good to the college he was a part of, and a protest which he would probably have supported too if he was alive. The former saw silent mourning as a mark of respect for the departed soul, while the latter felt nothing but fighting for the reason that caused his death would bring him eternal peace.

Which one of these are right, are they both? Or are they both wrong?  Who is to decide?  Well, here’s my take on it..

I have been glued to one book the past week – ‘The Immortals of Meluha‘. I don’t think there was a better time I laid my hands on this one. The book is a work of fiction gelled in with historical facts and myths, which portrays Lord Shiva – not as a mythological figure, but as a human being who walked on this very earth, who went on to realise the God in him because of his deeds, his karma. 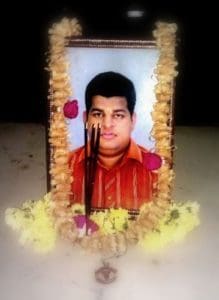 There is one particular instance from this book, which i felt was very insightful. In Shiva’s dream, he visits the temple of Meru he had previously visited in person, and talks to the Pandit. When Shiva asks him questions, the Pandit tells him that the only answers he can give are to those questions that Shiva himself has the answers for, existing somewhere in his consciousness but which he hasn’t chosen to listen to yet. He was there to help Shiva find what he already knew.

Here’s the excerpt of that part from the book modified to suit my post.

Pandit- What color is the leaf?
Shiva- It’s green.
Pandit- Why do you think it appears green to you?
Shiva- Because it is green!
Pandit- Scientifically why does the leaf appear green to you?
Shiva- White sunlight falls on the leaf. The leaf’s physical properties are such that it absorbs all the colors except green, which is then reflected back to my eyes.
Pandit- Exactly! Now think about the color of the leaf from the perspective of the leaf itself. Isn’t its color every single color in the world except green?
Shiva-(stunned into silence by the simplicity of the argument)
Pandit- There are many realities, many versions of what may seem obvious. What appears as the unshakeable truth might be the exact opposite in another context. It is the context or perspective that you’re looking from that moulds which particular reality you see. Are your eyes capable of seeing another reality?

This part of the book amazed me by the simplicity of the concept. It’s so right when they say – Step into a man’s shoes before judging him! Same thing stands for this situation. The grass will always be greener or the views will always seem more wrong on the other side. It all depends on which side we choose to live on! Personally, I chose to be on the ‘fighting for what caused his death’ side. I thought quietly mourning over him would probably lead to another mourning for another friend in future if steps were not taken immediately. We cannot bring him back, but we can try our best to make sure this unfortunate incident doesn’t repeat itself.  I cannot  say the others are wrong, nor can they say I am. To each their own. At the end what matters is where your loyalty lies.  As long as we were loyal to our dear college-mate, Ishan, it doesn’t matter which way we chose to show it.  So in conclusion, there can be no conclusion!

About Pranita Bhat 30 Articles
Here to spread magic....! I believe miracles happen n I have complete faith in THE SECRET. I love running my imaginations wild and fairytales make me happy. But i do realise one needs to be in touch with the reality to remain sane, practical and so i call myself Magically Grounded! ;-) Cheers to life!My Personal Blog is at Miracles Happen