Goa. The first thought which comes to mind is holiday on the beach.

Some trivia about Goa: 1. Dona Paula:Dona Paula is famous because it is here that two of Goa’s famous rivers, the Zuari and the Mandovi join the Arabian sea. From the secluded bay of Dona Paula, one can get a panoramic view of the Mormugao harbour. The place also attracts tourists with its aura of romance and myth — Dona Paula de Menezes; tourists throng the Dona Paula beach not only in search of the deceased beloved, but also to indulge in water sports on the clear waters.

One can take part in a host of activities like scooting and motor boat rides out here. As one of the most visited places in Goa, it is 7 km from the capital, Panaji, and transport is easily available. 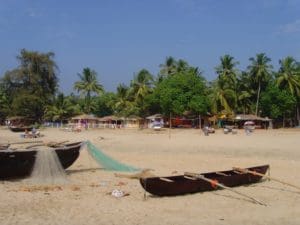 2. Agonda Beach: The Agonda beach down at the southern tip of Goa is fast emerging as a tourist spot. Nearly 50Km form the commercial capital of Goa,Margao,and close to the Karnataka border, people from different walks of life flock to it. The beach hosts picnics round the year. the beach also presents a beautiful scene in the mornings as the local fisher-folk drag their nets onto the shore as the boats bring in the night’s catch to deliver to the local market.

3. Cotigao Wildlife Sanctuary: The Cotigao Wildlife Sanctuary, 10 km south-east of Chaudi, was established in 1969 to protect the remote and vulnerable area of forest lining the Goa–Karnataka border. Encompassing 86 sq km of mixed deciduous woodland, the reserve is certain to inspire tree lovers, but less likely to yield many wildlife sightings. Visitors, however, stand a good chance of spotting at least two species of monkey, a couple of wild boar, and the old Gaur. Cotigao is a peaceful and scenic park that makes a pleasant day trip from Palolem, 12 km northwest. The wardens at the reserve’s small interpretative centre will show one how to get to a 25m –high treetop watchtower, overlooking a waterhole that attracts a handful of animals around dawn or dusk. 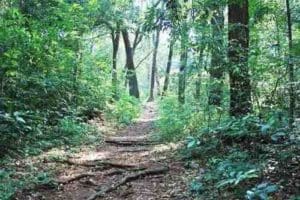 4. Netravalli waterfalls: Netravalli waterfalls are located in the Neturlim village of Sanguem Taluka. Nestled in the mountain range bordering the village, it is nearly 55 km away from Margao, the South Goa capital. There is a motorable road to the waterfall. One has to trek nearly 20 minutes through the forest to reach the place. The way winds around a rivulet, which has its source at the base of the waterfall. The waterfall itself is a delight to the eyes of a nature lover. One can take a swim in the cool waters at the base of the fall, or just leisure around marveling at the sheer beauty of the place. It’s an ideal spot for outings.

5. Dudh Sagar Waterfalls: The magnificent Dudh Sagar waterfalls is perched in the high peaks of the Western Ghats and is a sight to behold especially in the in the monsoons when it is in its full and furious glory. From a distance, the waterfall appears like a stream of milk rushing down the mountain side. The exuberant and spectacular waterfall is located in the Sanguem Taluka. Measuring a mighty 600 meters from head to foot, this waterfall on the Goa–Karnataka border, attracts a steady stream of visitors from the coasts and plateaus into the rugged western Ghats. After pouring across the Deccan Plateau, the head waters of the Mandovi River form a foaming torrent that splits into 3 streams to cascade down a near-vertical cliff face into a deep green pool.

The konkani name for the falls, which literally translated means “Sea of Milk”(Dudh–Milk, Sagar–Sea), derives for the clouds of milky foam that rises out of the bottom of the falls. Dudhsagar is set amidst breathtaking scenery overlooking the steep, crescent-shaped head of a valley carpeted with pristine tropical forest that is only accessible by foot or train. Near the top of the falls, the railway line from Vasco to Londa crosses the mountain side, with excellent view.

The falls can be reached by train from Margao. The train takes around 2 hrs. Alternatively, taxis and buses can be hired.

6.Mayem Lake: This is the most famous lake in Goa and one of the most popular tourist destinations on the itinerary of all the conducted sight-seeing tours. The lake is located in Bicholim taluka in North Goa, east of the market town of Mapusa. The region in which the lake is located, is mostly unspoilt countryside full of sleepy villages. The lake itself sits on wooded shores in a landscape of low hills. Bird life is plentiful here, with a large variety of birds resting on the shores. The placid waters of the lake make it ideal for boating. 7.The Salulim Dam: The salulim dam in a picturesque hilly area is just 3 km from Sanguem town. This water body is the lifeline of South Goa because it supplies water to the southern part of the state. Picnickers come to see the dam at all times during the year. But the best time to visit the dam is during the rainy season because the water gushing down into the river is a spectacle. Moreover the view from the dam is breathtaking. There is a motorable road leading to the dam and a government rest house for those who want to spend a day or two in the serene surroundings.

8.Rivona Spring:  This beautiful village located nearly 25 km away from Margao captures your attention as you make your way either by bus, by car or on your bike. The scenic village is lined with houses on both sides of the road. One can feast your eyes on the greenery of the village teeming with fields, fruit orchards, coconut trees and small hills. The river passes through the village keeping it cool. Undoubtedly, the main attraction of the village is the spring. People from far and wide flock to the place during summer to bathe in the pristine and cool waters. The experience is sure to inspire you to visit the place again, as it happens with most visitors. The best time to visit the spring is during summer.