Admit it, the comics page of your newspaper is your favourite section (probably after sports). If not, then you at least read it everyday. If you don’t, then pardon me, you’re a tasteless person.

Now that the internet has become analogous to a newspaper, it’s only appropriate that the internet has its own counterpart of newspaper comics. Therefore, we have webcomics. Because most of the webcomics are self-published and because internet is more far-reaching, many talented wannabe cartoonists have made good use of the internet platform. As a result there are many amazing webcomics out there. I shall list down the ten best webcomics I have come across that you MUST check out before you reach your grave:

Not really a series of comics by a person but rage comics submitted to a subreddit by thousands of users each day. These are stuff that makes you go “I know, right!” and they’re funny too. All those people who hate Bollywood movies have a voice… in form of stick figures! These comics are merciless in dissecting every element of newly released Bollywood movies. They hit the nail right on the head for most of them. Definitely worth ROFLing over! 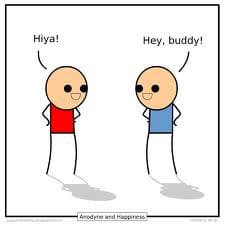 Probably the most popular out there. They can be random, nonsensical, disgusting and downright appalling. But they’re impressive and addictive nonetheless. Have a look if you’re game enough. This is an Indian webcomic, nothing to do with LOTR. It uses photographs of real people and edits them with texts to create sarcastically hilarious comics that every Indian can relate to. The only problem is that it gets updated very infrequently. But go through the archives and you’ll find gems that are side-splittingly funny.

Randomness is the keyword here. She’s a pro when it comes to random stuff that may come across as silly; but with colourful artwork like that, you simply can’t ignore it. Her one-panel comic per day mostly contains stuff that you wish were on your t-shirt so that you could show off how rad you are.

5. Married To The Sea

This also is a one-panel comic by Natalie Dee and her husband that is updated every day. I love the concept of these comics: it consists of “public domain images (Victorian or otherwise) combined with new captions written by the authors”. They are super-funny. Check them out for realz.

These comics are human stories told via bugs. What makes these comics different is that there is a gag in each panel, rather than a build-up and the final punch line in the last panel. These comics are witty and totally random. Also, the language used in these comics is terribly funny.

The people there compile simple everyday truths into some hilarious comics. ‘nuff said. 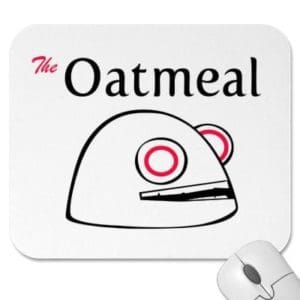 The guy behind The Oatmeal takes his observations on life and the world and converts them into supremely hilarious comics/quizzes/articles. They are smart and witty to an extreme degree, plus the drawing style is remarkable. He also gets as brutally educational as sh*t. You should DEFINITELY check The Oatmeal out.

The most popular and probably the best webcomic of ALL time. You probably are already a fan. The comic says it’s “a webcomic of romance, sarcasm, math, and language.” So you got the gist. It has a simple drawing style (stick figures), so you’re not bombarded with colours and a multitude of technique. Needless to say, they’re most excellently humorous too. CHECK IT OUT IF YOU HAVEN’T ALREADY!

About Swarna 7 Articles
Swarna is a twelve-tentacled anthropomorphic squid who was born out of radioactive waste. She probably loves you, but you can't say for sure. She is also, unfortunately, trapped in the body of a boring Masters student at University of Florida.
Website