“Dying is easy, Comedy is hard”. These were the words that came to mind after watching Ada Dramatics’ main production – ‘The Great Raja Master Drama Company’. This play won hearts in Hotel Fortune Inn on 6th April. Everybody who left the hall had a feeling of freshness after a whole hear-ted laughing of 1.5 hours aptly timed with a fifteen-minute break in between.

The play started amazingly with the excellent involvement of the audience. There was equal space occupied by the actors on-stage and off-stage along with the audience. The play is about a middle-aged man, a veteran tailor named Raja Master and his right hand Dilenada who aspire to open a ‘dirama’ company. The protagonist of the play is a sarcastic, short-tempered and an angry director who is frustrated with his actors and his assistant Dilenada for working abruptly. The dialogues of both the main characters make you laugh throughout the play. The director, Raja master is angry with his actors for their poor acting skills and taunts them throughout the play with his witty and savage dialogues. 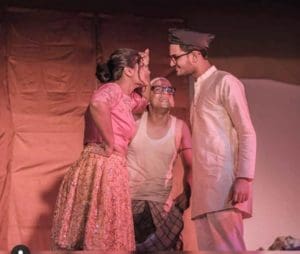 The best part about this play was the comedy was not only initiated through dialogues but also through actions, creepy smiles, expressions by the lead role, background music, phrase repetition, funny references, and abrupt dance moves. Comedy itself is a theme that is supposed to be taken by challenging actors and directors but, Ada Dramatics has done a job that leaves one speechless.

The publicity for this play was unique. The team showcased a mime in student plaza a few days before the play. The mime worked as a live trailer which was an innovative idea by the publicity team. The sets department had done a great job setting up the stage giving it a typical drama company vibes. “Many posters and props were made for the play. We had to decide the transitions during the rehearsals. A lot of effort was invested to deliver an amazing play within a short period of time”, says Bhaavya, a member in the sets department.

Acting in a humorous play requires strong and core skills of acting. The best part was all the Ada members took part in the play with their own roles. For instance, few of the cast members were seated along with the audience to enact when required. The actors pulled it off aptly with an optimum amount of body language and dialogue delivery. The brilliant acting was supported by mesmerizing background music and vocal songs by Asmitha Asokan. The perfect blend of the various instruments like tabla, harmonium, flute, and dhol was accompanied throughout the play. “ The new concept introduced in the play was breaking the fourth wall and all of us taking part in the play in our own little ways.”, says Kopal Dubey, Publicity Head, Ada Dramatics. The lights team played with their lights according to the seriousness of the situation which was a perfect icing on the cake. “ It was my first center stage and I had an extremely positive experience. Every actor had an aim not only to bring a scripted character to life but also to induce comedy into the play by various means.”, says Shantanu Rana, the actor who essayed the role of Raja Master. 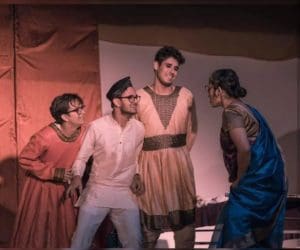 The direction couldn’t be any better at depicting foregrounding, flashback and comedy. From focusing on comedy to managing the big cast, the directors and the assistant directors have given their best. Every actor had to be trained uniquely for different characters to achieve perfection. The casting was brilliant with all the actors given a perfect role to essay in accordance with their body structure, voice, and personality. Naga Subramanium, the assistant director said, “I was proud of the way the actors carried themselves on stage. The savage dialogues and punchlines were received warmly by the audience. The whole play was a heartening experience for me.”

For me, the play was a refreshing one with its elements of humor. It was a brilliant play by Ada Dramatics. I enjoyed throughout the play without any air of monotony. The entire ambiance of Chaitya Hall was filled with fun and laughter. Focusing on a genre of comedy, Ada has done a brilliant job of showcasing it without offending anybody.