Latest on ManipalBlog
In this article hide
Canine anorexia
Digestive problems?
Mouth and teeth issues
Dogs and fever
How to treat an anorectic dog

Having a voracious dog at home is sometimes a great problem. But the opposite is perhaps even worse, which will probably be confirmed by everyone who has experienced it. A gloomy look at a slimming animal and a feeling of helplessness – he just doesn’t want to eat.

Not only people, but also domestic animals very often have a sweet tooth, so it is sometimes a bit difficult to recognize whether the fact that they did not eat the bowl we presented them stems from a health problem, or it just does not smell and disgust and waits, whether there would be something better. Such behavior is often encountered in puppies and younger dogs, who try to see if they do not eat a bowl of granules, something else will come, because the owner is afraid that they will suffer. Dog behavior training is about changing the dog’s behavior once and for all.

In dogs who already have strong eating habits, anorexia can mean the beginning of a disease that we should catch in time. You can learn more about different kinds of canine anorexia here: https://topdogtips.com/anorexia-in-dogs/. In the case of anorexia, the veterinarians have to get the exact and precise information from the owners whether the animal does not eat at all and therefore suffers from so-called anorexia, or whether he chooses, and it is therefore only anorexia, which is a milder condition.

Another important information is whether your canine companion is trying to eat and is not doing well (for example, with dental problems), or whether he is not even interested in food. And now let’s look at the most common causes of anorexia, and what to do in that case.

Probably the most common cause is digestive problems. We all know it for sure when we eat something bad, or a virus falls on us, we don’t even think about food. And it’s the same for domesticated animals. If they vomit or have diarrhea, it is often accompanied by a reluctance to eat. And it’s actually good, it’s a defense mechanism where the body signals that it needs to rest and get together before it starts processing food again. There is pet-friendly CBD also available in the market that you can add to the diet of your dog. Click here to know more.

In this case, we give the dog only fluids and starve for 24-36 hours. If the animal does not vomit after drinking and is otherwise in the mood, diarrhea usually subsides within 24 hours, and then we can slowly start feeding it in small portions. If the dog vomits even after drinking, or there is blood in the stool, it is necessary to see a veterinarian.

Another cause that can lead to a pet not eating is a disease of the mouth and teeth. It is true that a dog has a very high pain threshold in this respect because although the teeth are in a completely catastrophic state, the animal usually eats. However, if there is severe gingivitis, it can be so painful for the animal that it will stop eating. Click here to learn how to treat canine gingivitis.

Likewise, a foreign body, such as a stick or bone, inserted into the gums or under the tongue, causes the animal not to eat. In addition, he usually has a lot of saliva and can feel it in his mouth – this should alert the owner that it is time to seek professional help.

Whether it is pneumonia, inflammation of the uterus or prostate, a contaminated wound after a bite – the moment a fever occurs around 40 ° Celsius, the dog usually stops eating. Each owner can measure the temperature of the animal at home alone – just insert the thermometer into his rectum (like a small child), and then just not be scared when 38.5 ° C appears.

Dogs have a physiologically higher temperature than humans, their normal temperature is between 37.5 – 39.0 ° C. If you find that your pet has a fever, it is not recommended to give him human medication to lower the temperature, as they may cause digestive problems in the dog. It is better to visit a veterinarian, who, in addition to suppressing the fever, also has the task of finding out what caused it and apply the targeted treatment. 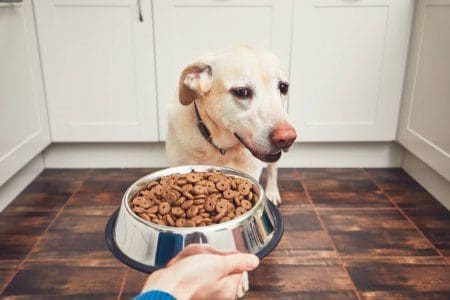 How to treat an anorectic dog

No matter what might have triggered the animal’s anorexia, there are several solutions to it. First of all, the dog has to regain motivation to eat, at least a portion of what he would normally devour. Natural medicine can come handy here.

One great medicine that has been proven to increase the dog’s willingness to eat is the CBD oil. You can learn more about Read more about it at https://holistapet.com/.

CBD oil contains cannabidiol, an extract from the hemp plant which stimulates the neurons responsible for triggering hunger and appetite. It reduces nausea and helps the animal regain strength to eat.

What’s more, CBD products do not have any undesirable side effects and they go well with most chemical substances used in medicine. That way, even if your canine companion experiences a lack of appetite due to a serious condition, you can give him CBD oil to stimulate him to eat.

One great advantage of cannabidiol is its good taste, so even animals who are unwell typically eat it without problems. Sprinkle some oil on his favorite dry food or mix some oil drops in his wet food to have him devour it.