Since I’ve been very cynical on this forum for a long time I thought I’d share with you some of the things I wish would come true in India. Some would be far fetched, some would be unreasonable, and some are desperately needed to be realized. They’re all arranged in no such order of importance, I wrote them as and when my mind thought of them.

So, without further ado, These Are The 67 Dreams I Want To Come True In India Before I Die: 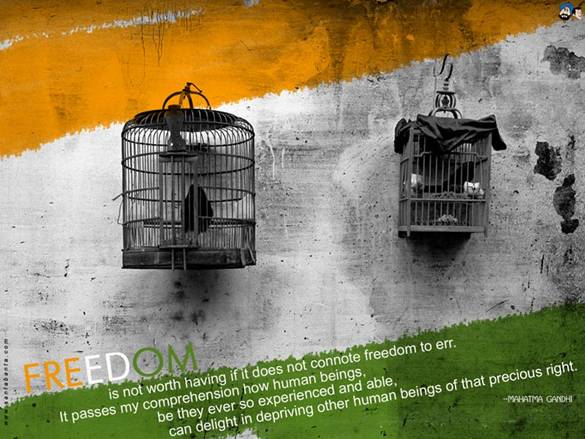 66. Better shows on Television than the present soap operas.

63. An end to annoying marketing calls in the middle of the night.

59. An end to hate politics on the basis of regionalism.

55. An end to dynastic politics.

53. Tigers no longer being an endangered species.

52. Indian Cinema winning international awards; not just being represented by vacuous actresses at the red carpets at such events.

50. Easily available food for all.

48. India sending a man to The Moon, Mars and beyond.

46. Ease of investment for companies and to build industries.

44. India winning the highest number of medals in the Olympics.

43. An end to excruciating taxes on each and everything that forms a part of life in India.

39. An Indian who was born, brought up, educated, and working in India winning a Nobel Prize for any of the sciences.

38. Dawood and other Mafia dons brought back to justice in India.

37. Welfare for the elderly.

36. Freedom fighters other than Gandhi and Nehru getting their due.

35. Other sports in India producing champions on the international stage.

32. Better Education for children of all sections of society.

31. Highly paying jobs for youth who have an undergraduate degree.

30. An end to redtapism in bureaucracy.

27. An efficient and friendly police force.

23. An end to national flags being discarded like rubbish after national festivals.

22. An end to our obsession with China.

21. India recapturing all of its disputed territory.

20. An end to civil servants being politicians’ servants.

18. A stable and thriving economy.

17. An end to Pakistan’s nuisance value.

16. An end to female infanticide and foeticide.

15. The Indian armed forces becoming the most intimidating force in the world.

13. The Lokpal Bill being passed by Parliament as envisioned by Anna Hazare.

8. Our historical monuments saved from defacement, encroachment and destruction.

7. An end to farmers’ suicides.

6. Peace and harmony among people of all religions.

4. A Cohesive Government with effective administration.

3. A safer country for women.

1. An India where Truth Alone Prevails.